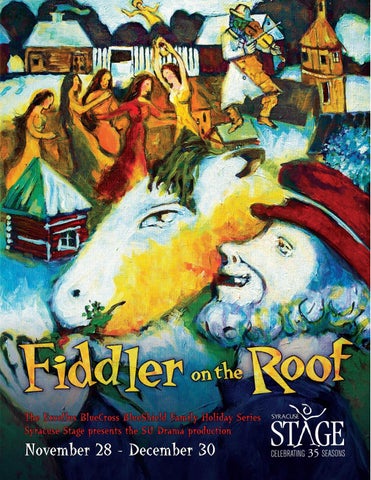 2007 - 2008 Educational Outreach Corporate Sponsors Since 1849 National Grid and its predecessor companies have been part of the Syracuse community, helping to meet the energy needs of over two million Upstate New York customers. We are proud to contribute to the quality of life through the energy we deliver and through the many ways we give back to the communities we serve.

BOOK AND LYRICS BY

DIRECTED and CHOREOGRAPHED BY

KNOW YOUR FIDDLER A Brief Introduction Fiddler on the Roof is set in the small Jewish village of Anatevka, Russia in 1905. It is primarily concerned with the lives of Tevye, a dairyman, his wife Golde, and their five daughters. At this time, marriages had more to do with property and families than love. Tevye struggles to keep his family intact as it is threatened by his daughters’ controversial romances and his country’s anti-semitic violence.

From Fiddler and Sholem Aleichem

lthy enough, “No matter how ba “If you’re wea d things get you’ ve ll you stupid.” got to go on living. no one will ca .. even if it kills yo u.” “The Bible clearly teaches us, You must never trust an employer!”

e, the poor with

up with prid “The rich well

art, music, and words How everything came together to create Fiddler on the Roof

The story and characters of Fiddler on the Roof are drawn from Tevye the Milkman, written by Solomon Rabinowitz (who used the pen name Sholem Aleichem) around the turn of the century. Aleichem is sometimes called the Jewish Mark Twain because of his use of folklore and his ability to write in a style that connected with everyday working people. He often wrote in Yiddish, a language that was more accessible to the Jewish masses than the more conventional Russian or even Hebrew. Sholem Aleichem created a huge amount of writing: novels, plays, short stories, children’s books, and an autobiography called Funm Yarrid. Later in his life, Aleichem moved to New York City, where he co-founded the Yiddish Art Theatre. He also wrote a number of political essays calling for the creation of a Jewish nation-state. He died in New York in 1916. 32 years later, his idea for a Jewish nation-state came to life when Israel was created in 1948.

France. Several of Chagall’s paintings include fiddlers and other musicians. In his hometown, the fiddle was played during all big events: births, weddings, funerals, etc. Many people believe that while the writers of Fiddler on the Roof based their story on Sholem Aleichem’s writings, the actual title comes from Chagall’s 1920 painting, Music. Chagall, like Sholem Aleichem, was a vocal advocate for the creation of Israel which, unlike Aleichem, he lived to see.

Okay, but besides violins and Israel, what connection is there between the Sholem Aleichem stories, Marc Chagall’s paintings, and a Broadway Musical? Settle down! I’m getting there. What ties everything together is a man named Boris Aronson. He was a scenic designer and painter who had worked in Russia on several of Sholem Aleichem’s plays. As an artist, he was inspired by... (drumroll)... Marc Chagall. Later, he moved to America and found tremendous success. When he heard that a musical was being written based on Aleichem’s stories, he fought for the job of designing its set. His original designs are clearly influenced by Chagall’s art.

On the next page, you will see two of Marc Chagall’s paintings and Boris Aronson’s ‘Fiddler on the Roof’ scenic design. What similarities do you see between them? Look for the details (hint: see anything unusual about the hands in Chagall’s self-portrait?) Here are some elements of visual art to get you started: LINE (length, width, texture, etc.) COLOR, which can be described by: SHAPE (geometric, man-made, or free-form) Hue (Red, yellow, blue) FORM (3-D shape) Intensity (Bright or dull) TEXTURE (Rough, smooth, soft, etc.) Value (Light or dark) SPACE (What is or isn’t there) Syracuse Stage Department of Educational Outreach (315) 443-1150

Boris Aronsonâ&#x20AC;&#x2122;s scenic design for the original Fiddler on the Roof

(If you’ve never seen Rocky IV, it is a classic!)

The Crimean War – Russia gets knocked out by a combination of: the UK, France, the Ottoman Empire, and Piedmont-Sardinia. 1861 Tsar Alexander II abolishes serfdom (basically a kind of slavery), fearing a potential revolution by the serfs (not to be confused with surfers, who are too chill for that kind of thing.) This may or may not have led directly to… 1866 Alexander II is almost assassinated. 1872 Karl Marx’s Das Kapital is translated into Russian. It is more or less the ‘sequel’ to The Communist Manifesto (1848.) 1873-74 The To-The-People Movement grows out of the writings of Marx and other Socialists (not to be confused with socialites, see also: Paris Hilton.)

Russia, Soviet Union, or USSR? USSR stands for Union of Soviet Socialist Republics, also known as the Soviet Union. The USSR existed only between 1922 (after the Civil War ended) and 1991 (when they dissolved it in favor of a more democratic government.) Any time before 1922 or after 1991, it is simply called Russia.

1881 Alexander II is actually assassinated (blown up by a bomb while traveling to St. Petersburg.) His son takes the throne. His name is, predictably, Alexander III. His dad considered making Russia more democratic (that is, before he was blown to pieces) but his son decides instead to censor freedom of religion, establish a secret police force, and allow anti-Semitic violence (called ‘Pogroms.’) He did take after his father in one way: the citizens tried to kill him several times before he died of natural causes in 1894. 1894 Nikolai Alexandrovich Romanov, son of Alexander III, takes the throne. Over the next 5 years, the different revolutionary groups in Russia would unite into one (the Russian Social Democratic Party) and then split again into two: the Mensheviks and the Bolsheviks. 1905 ‘Bloody Sunday,’ a riot in which 500 peaceful protestors were killed by the Tsar’s soldiers (this is not the ‘Bloody Sunday’ that U2 named their song after: that was in Ireland in 1972.) As a result of the Russian ‘Bloody Sunday,’ a small revolution begins. The Tsar gives in and creates the Duma, a sort of Parliament, but it was dissolved the following year. Also in 1905 ‘Fiddler on the Roof’ is set in this year. Anti-Semitism has gotten much worse. More than 300 towns and cities are devastated, and thousands are killed. 1914 World War I begins in Europe, and Russia joins the fight. But they were so busy fighting with their own citizens over the government that they forgot to keep up with the technology of the rest of the world. The result: another whooping. And the economy crashed. Which leads to… 1917 The Russian Revolution (aka the Bolshevik Revolution) and the Russian Civil War officially begin. Drago is pleased with your new-found knowledge.

What’s in a name? No, seriously. I’d like to know. Everyone always thinks I’m just quoting myself. Come on. Who does that? Seriously, though, what is in these names?

In the Russian culture, names are very important. But to us, watching a play or reading a novel, they can sometimes be confusing. Often one character might be called by two or three different names. These differences tell a lot about your relationship with the person. For example, a woman named Alexandra Mikhailova Khrushchev might be called:

Alexandra (her first name) Sasha (nickname for Alexandra; nicknames are very popular in Russia) Alexandra Mikhailova (in a formal situation) Mikhailova (by an old friend)

In Russian, your “middle name” is not chosen, it is based on your father’s name. This is called the Patronymic name. In our example, Sasha’s name literally means Alexandra “Daughter-of-Mikhail” Khrushchev.

TRY CONVERTING YOUR BORING NAME INTO A RUSSIAN NAME! Step 1: Write your first name in Box A. Step 2: Write your father’s first name in Box B, but leave a little space at the end. If his name ends in a vowel, erase the vowel(s) and replace it with either –in or –yn. (Example: Mario = Marin or Maryn) If his name ends in a consonant, add either –ov or –ev. (Example: Brian = Brianov or Brianev) AND, if you happen to be ridiculously wealthy, or the Tsar of Russia, or want to pretend, add –ich. (Example: Brian = Brianov or Brianev = Brianovich or Brianevich) Lastly, if you are female, add the letter A at the very end. (Example: Brianov = Brianova; Brianovich = Brianovicha) Step 3: Write your last name in Box C. For fun, you can make it sound more authentically Russian by adding –ov, -ev, -in, or –sky to the end. Ladies, add –ova, -eva, -ina, or -skaya. Step 4: Read your new name straight across! BOX BOX A A

Take Advice from a 2-Dimensional Logo! Stageman’s guide to...

Theatre Etiquette! Okay, look. This is not TV or the movies. The actors can see and hear you. Yeah, it’s dark and there’s a lot of people, but trust us: they can see you. This is the greatest part of theatre - the actors feed off your energy! The more you put in, the more you get out! But interrupting or distracting the performance... that’s just being a jerk. Excuse me, I mean ‘inconsiderate.’ And not just to the actors - audiences hate being distracted, too.

isn’t just onics! Turn them off. It ctr ele er oth or ES ON NO CELL PH one makes a . Flipping open your ph ringing that is distracting see. s and audience - can tor ac ne yo er ev t tha glow Bad Stageman

Applause & Laughter = Good Yelling at actors or audience = BAD Don’t get up to leave unless it is an absolute emergency. Trips to the bathroom can wait til intermission, can’t they?

time to find your Arrive with enough g. Or, rushin’. seats without rushin , forget it. Get it? Russian? Eh

There, this isn’t so much to ask for, is it? It’s mostly just common sense. Everyone in the audience wants to enjoy the show, and the performers want to be heard and respected. Keep that in mind and you’ll make me a happy two-dimensional marketing logo.

Also check out these

A nonprofit independent licensee of the BlueCross BlueShield Association

The health of a community is judged not only by the well being of its citizens, but also by the cultural resources it has to offer. A well-established theatre is a hallmark of a thriving community. As part of our commitment to the community, Excellus BlueCross BlueShield helps to support the arts. Weâ&#x20AC;&#x2122;re pleased to partner with the Syracuse Stage for the 2007-2008 season as the Family Holiday Sponsor of Fiddler on the Roof. We applaud the citizens of Central New York for their continuing support of the Syracuse Stage.