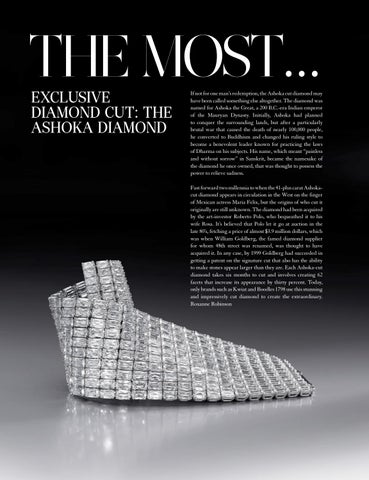 THE MOST… EXCLUSIVE DIAMOND CUT: THE ASHOKA DIAMOND

If not for one man’s redemption, the Ashoka cut diamond may have been called something else altogether. The diamond was named for Ashoka the Great, a 200 B.C.-era Indian emperor of the Mauryan Dynasty. Initially, Ashoka had planned to conquer the surrounding lands, but after a particularly brutal war that caused the death of nearly 100,000 people, he converted to Buddhism and changed his ruling style to become a benevolent leader known for practicing the laws of Dharma on his subjects. His name, which meant “painless and without sorrow” in Sanskrit, became the namesake of the diamond he once owned, that was thought to possess the power to relieve sadness. Fast forward two millennia to when the 41-plus carat Ashokacut diamond appears in circulation in the West on the finger of Mexican actress Maria Felix, but the origins of who cut it originally are still unknown. The diamond had been acquired by the art-investor Roberto Polo, who bequeathed it to his wife Rosa. It’s believed that Polo let it go at auction in the late 80’s, fetching a price of almost $3.9 million dollars, which was when William Goldberg, the famed diamond supplier for whom 48th street was renamed, was thought to have acquired it. In any case, by 1999 Goldberg had succeeded in getting a patent on the signature cut that also has the ability to make stones appear larger than they are. Each Ashoka-cut diamond takes six months to cut and involves creating 62 facets that increase its appearance by thirty percent. Today, only brands such as Kwiat and Boodles 1798 use this stunning and impressively cut diamond to create the extraordinary. Roxanne Robinson