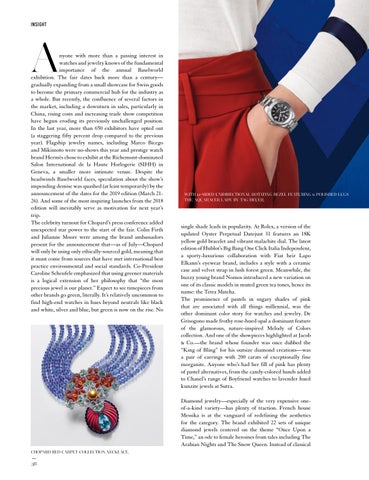 nyone with more than a passing interest in watches and jewelry knows of the fundamental importance of the annual Baselworld exhibition. The fair dates back more than a century— gradually expanding from a small showcase for Swiss goods to become the primary commercial hub for the industry as a whole. But recently, the confluence of several factors in the market, including a downturn in sales, particularly in China, rising costs and increasing trade show competition have begun eroding its previously unchallenged position. In the last year, more than 650 exhibitors have opted out (a staggering fifty percent drop compared to the previous year). Flagship jewelry names, including Marco Bicego and Mikimoto were no-shows this year and prestige watch brand Hermès chose to exhibit at the Richemont-dominated Salon International de la Haute Horlogerie (SIHH) in Geneva, a smaller more intimate venue. Despite the headwinds Baselworld faces, speculation about the show’s impending demise was quashed (at least temporarily) by the announcement of the dates for the 2019 edition (March 2126). And some of the most inspiring launches from the 2018 edition will inevitably serve as motivation for next year’s trip. The celebrity turnout for Chopard’s press conference added unexpected star power to the start of the fair. Colin Firth and Julianne Moore were among the brand ambassadors present for the announcement that—as of July—Chopard will only be using only ethically-sourced gold, meaning that it must come from sources that have met international best practice environmental and social standards. Co-President Caroline Scheufele emphasized that using greener materials is a logical extension of her philosophy that “the most precious jewel is our planet.” Expect to see timepieces from other brands go green, literally. It’s relatively uncommon to find high-end watches in hues beyond neutrals like black and white, silver and blue, but green is now on the rise. No

single shade leads in popularity. At Rolex, a version of the updated Oyster Perpetual Datejust 31 features an 18K yellow gold bracelet and vibrant malachite dial. The latest edition of Hublot’s Big Bang One Click Italia Independent, a sporty-luxurious collaboration with Fiat heir Lapo Elkann’s eyewear brand, includes a style with a ceramic case and velvet strap in lush forest green. Meanwhile, the buzzy young brand Nomos introduced a new variation on one of its classic models in muted green tea tones, hence its name: the Tetra Matcha. The prominence of pastels in sugary shades of pink that are associated with all things millennial, was the other dominant color story for watches and jewelry. De Grisogono made frothy rose-hued opal a dominant feature of the glamorous, nature-inspired Melody of Colors collection. And one of the showpieces highlighted at Jacob & Co.—the brand whose founder was once dubbed the “King of Bling” for his outsize diamond creations—was a pair of earrings with 200 carats of exceptionally fine morganite. Anyone who’s had her fill of pink has plenty of pastel alternatives, from the candy-colored bands added to Chanel’s range of Boyfriend watches to lavender hued kunzite jewels at Sutra. Diamond jewelry—especially of the very expensive oneof-a-kind variety—has plenty of traction. French house Messika is at the vanguard of redefining the aesthetics for the category. The brand exhibited 22 sets of unique diamond jewels centered on the theme “Once Upon a Time,” an ode to female heroines from tales including The Arabian Nights and The Snow Queen. Instead of classical