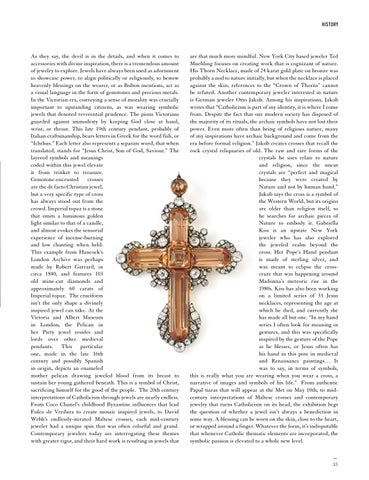 As they say, the devil is in the details, and when it comes to accessories with divine inspiration, there is a tremendous amount of jewelry to explore. Jewels have always been used as adornment to showcase power, to align politically or religiously, to bestow heavenly blessings on the wearer, or as Bolton mentions, act as a visual language in the form of gemstones and precious metals. In the Victorian era, conveying a sense of morality was crucially important to upstanding citizens, as was wearing symbolic jewels that denoted reverential prudence. The pious Victorians guarded against immodesty by keeping God close at hand, wrist, or throat. This late 19th century pendant, probably of Italian craftsmanship, bears letters in Greek for the word fish, or “Ichthus.” Each letter also represents a separate word, that when translated, stands for “Jesus Christ, Son of God, Saviour.” The layered symbols and meanings coded within this jewel elevate it from trinket to treasure. Gemstone-encrusted crosses are the de facto Christian jewel, but a very specific type of cross has always stood out from the crowd. Imperial topaz is a stone that emits a luminous golden light similar to that of a candle, and almost evokes the sensorial experience of incense-burning and low chanting when held. This example from Hancock’s London Archive was perhaps made by Robert Garrard, in circa 1840, and features 103 old mine-cut diamonds and approximately 60 carats of Imperial topaz. The cruciform isn’t the only shape a divinely inspired jewel can take. At the Victoria and Albert Museum in London, the Pelican in her Piety jewel resides and lords over other medieval pendants. This particular one, made in the late 16th century and possibly Spanish in origin, depicts an enameled mother pelican drawing jeweled blood from its breast to sustain her young gathered beneath. This is a symbol of Christ, sacrificing himself for the good of the people. The 20th century interpretations of Catholicism through jewels are nearly endless. From Coco Chanel’s childhood Byzantine influences that lead Fulco de Verdura to create mosaic inspired jewels, to David Webb’s endlessly-iterated Maltese crosses, each mid-century jeweler had a unique spin that was often colorful and grand. Contemporary jewelers today are interrogating these themes with greater rigor, and their hard work is resulting in jewels that

are that much more mindful. New York City based jeweler Ted Muehling focuses on creating work that is cognizant of nature. His Thorn Necklace, made of 24 karat gold plate on bronze was probably a nod to nature initially, but when the necklace is placed against the skin, references to the “Crown of Thorns” cannot be refuted. Another contemporary jeweler interested in nature is German jeweler Otto Jakob. Among his inspirations, Jakob writes that “Catholicism is part of my identity, it is where I come from. Despite the fact that our modern society has disposed of the majority of its rituals, the archaic symbols have not lost their power. Even more often than being of religious nature, many of my inspirations have archaic background and come from the era before formal religion.” Jakob creates crosses that recall the rock crystal reliquaries of old. The raw and rare forms of the crystals he uses relate to nature and religion, since the uncut crystals are “perfect and magical because they were created by Nature and not by human hand.” Jakob says the cross is a symbol of the Western World, but its origins are older than religion itself, so he searches for archaic pieces of Nature to embody it. Gabriella Kiss is an upstate New York jeweler who has also explored the jeweled realm beyond the cross. Her Pope’s Hand pendant is made of sterling silver, and was meant to eclipse the crosscraze that was happening around Madonna’s meteoric rise in the 1980s. Kiss has also been working on a limited series of 33 Jesus necklaces, representing the age at which he died, and currently she has made all but one. “In my hand series I often look for meaning in gestures, and this was specifically inspired by the gesture of the Pope as he blesses, or Jesus often has his hand in this pose in medieval and Renaissance paintings… It was to say, in terms of symbols, this is really what you are wearing when you wear a cross, a narrative of images and symbols of his life.” From authentic Papal tiaras that will appear at the Met on May 10th, to midcentury interpretations of Maltese crosses and contemporary jewelry that turns Catholicism on its head, the exhibition begs the question of whether a jewel isn’t always a benediction in some way. A blessing can be worn on the skin, close to the heart, or wrapped around a finger. Whatever the form, it’s indisputable that whenever Catholic thematic elements are incorporated, the symbolic passion is elevated to a whole new level.