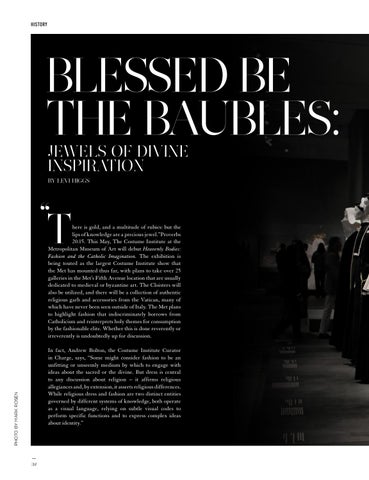 BLESSED BE THE BAUBLES: JEWELS OF DIVINE INSPIRATION BY LEVI HIGGS

here is gold, and a multitude of rubies: but the lips of knowledge are a precious jewel.”Proverbs 20:15. This May, The Costume Institute at the Metropolitan Museum of Art will debut Heavenly Bodies: Fashion and the Catholic Imagination. The exhibition is being touted as the largest Costume Institute show that the Met has mounted thus far, with plans to take over 25 galleries in the Met’s Fifth Avenue location that are usually dedicated to medieval or byzantine art. The Cloisters will also be utilized, and there will be a collection of authentic religious garb and accessories from the Vatican, many of which have never been seen outside of Italy. The Met plans to highlight fashion that indiscriminately borrows from Catholicism and reinterprets holy themes for consumption by the fashionable elite. Whether this is done reverently or irreverently is undoubtedly up for discussion.

In fact, Andrew Bolton, the Costume Institute Curator in Charge, says, “Some might consider fashion to be an unfitting or unseemly medium by which to engage with ideas about the sacred or the divine. But dress is central to any discussion about religion – it affirms religious allegiances and, by extension, it asserts religious differences. While religious dress and fashion are two distinct entities governed by different systems of knowledge, both operate as a visual language, relying on subtle visual codes to perform specific functions and to express complex ideas about identity.”