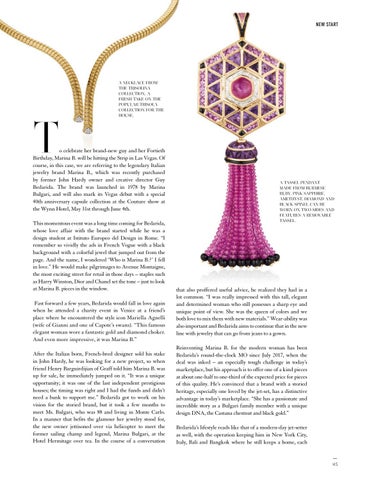 A NECKLACE FROM THE TRISOLINA COLLECTION, A FRESH TAKE ON THE POPULAR TRISOLA COLLECTION FOR THE HOUSE.

o celebrate her brand-new guy and her Fortieth Birthday, Marina B. will be hitting the Strip in Las Vegas. Of course, in this case, we are referring to the legendary Italian jewelry brand Marina B., which was recently purchased by former John Hardy owner and creative director Guy Bedarida. The brand was launched in 1978 by Marina Bulgari, and will also mark its Vegas debut with a special 40th anniversary capsule collection at the Couture show at the Wynn Hotel, May 31st through June 4th. This momentous event was a long time coming for Bedarida, whose love affair with the brand started while he was a design student at Istituto Europeo del Design in Rome. “I remember so vividly the ads in French Vogue with a black background with a colorful jewel that jumped out from the page. And the name, I wondered ‘Who is Marina B.?’ I fell in love.” He would make pilgrimages to Avenue Montaigne, the most exciting street for retail in those days – staples such as Harry Winston, Dior and Chanel set the tone – just to look at Marina B. pieces in the window. Fast forward a few years, Bedarida would fall in love again when he attended a charity event in Venice at a friend’s place where he encountered the style icon Mariella Agnelli (wife of Gianni and one of Capote’s swans). “This famous elegant woman wore a fantastic gold and diamond choker. And even more impressive, it was Marina B.” After the Italian born, French-bred designer sold his stake in John Hardy, he was looking for a new project, so when friend Henry Barguirdijian of Graff told him Marina B. was up for sale, he immediately jumped on it. “It was a unique opportunity; it was one of the last independent prestigious houses; the timing was right and I had the funds and didn’t need a bank to support me.” Bedarida got to work on his vision for the storied brand, but it took a few months to meet Ms. Bulgari, who was 88 and living in Monte Carlo. In a manner that befits the glamour her jewelry stood for, the new owner jettisoned over via helicopter to meet the former sailing champ and legend, Marina Bulgari, at the Hotel Hermitage over tea. In the course of a conversation

A TASSEL PENDANT MADE FROM BURMESE RUBY, PINK SAPPHIRE, AMETHYST, DIAMOND AND BLACK SPINEL CAN BE WORN ON TWO SIDES AND FEATURES A REMOVABLE TASSEL.

that also proffered useful advice, he realized they had in a lot common. “I was really impressed with this tall, elegant and determined woman who still possesses a sharp eye and unique point of view. She was the queen of colors and we both love to mix them with new materials.” Wear-ability was also important and Bedarida aims to continue that in the new line with jewelry that can go from jeans to a gown. Reinventing Marina B. for the modern woman has been Bedarida’s round-the-clock MO since July 2017, when the deal was inked – an especially tough challenge in today’s marketplace, but his approach is to offer one of a kind pieces at about one-half to one-third of the expected price for pieces of this quality. He’s convinced that a brand with a storied heritage, especially one loved by the jet-set, has a distinctive advantage in today’s marketplace. “She has a passionate and incredible story as a Bulgari family member with a unique design DNA, the Castana chestnut and black gold.” Bedarida’s lifestyle reads like that of a modern-day jet-setter as well, with the operation keeping him in New York City, Italy, Bali and Bangkok where he still keeps a home, each