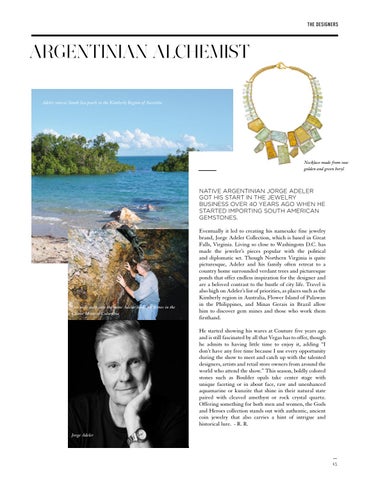 Necklace made from raw golden and green beryl

NATIVE ARGENTINIAN JORGE ADELER GOT HIS START IN THE JEWELRY BUSINESS OVER 40 YEARS AGO WHEN HE STARTED IMPORTING SOUTH AMERICAN GEMSTONES.

Eventually it led to creating his namesake fine jewelry brand, Jorge Adeler Collection, which is based in Great Falls, Virginia. Living so close to Washingotn D.C. has made the jeweler’s pieces popular with the political and diplomatic set. Though Northern Virginia is quite picturesque, Adeler and his family often retreat to a country home surrounded verdant trees and picturesque ponds that offer endless inspiration for the designer and are a beloved contrast to the bustle of city life. Travel is also high on Adeler’s list of priorities, as places such as the Kimberly region in Australia, Flower Island of Palawan in the Philippines, and Minas Gerais in Brazil allow him to discover gem mines and those who work them firsthand. He started showing his wares at Couture five years ago and is still fascinated by all that Vegas has to offer, though he admits to having little time to enjoy it, adding “I don’t have any free time because I use every opportunity during the show to meet and catch up with the talented designers, artists and retail store owners from around the world who attend the show.” This season, boldly colored stones such as Boulder opals take center stage with unique faceting or in about face, raw and unenhanced aquamarine or kunzite that shine in their natural state paired with cleaved amethyst or rock crystal quartz. Offering something for both men and women, the Gods and Heroes collection stands out with authentic, ancient coin jewelry that also carries a hint of intrigue and historical lure. - R. R.