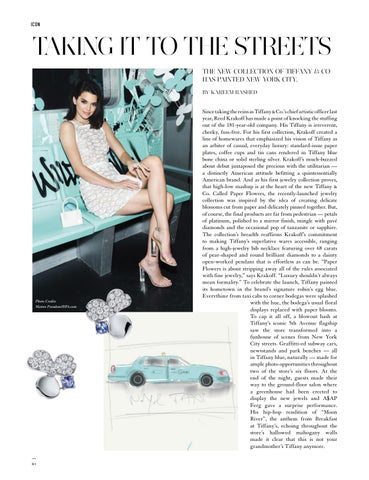 TAKING IT TO THE STREETS THE NEW COLLECTION OF TIFFANY & CO HAS PAINTED NEW YORK CITY. BY KAREEM RASHED

Since taking the reins as Tiffany & Co.’s chief artistic officer last year, Reed Krakoff has made a point of knocking the stuffing out of the 181-year-old company. His Tiffany is irreverent, cheeky, fuss-free. For his first collection, Krakoff created a line of homewares that emphasized his vision of Tiffany as an arbiter of casual, everyday luxury: standard-issue paper plates, coffee cups and tin cans rendered in Tiffany blue bone china or solid sterling silver. Krakoff’s much-buzzed about debut juxtaposed the precious with the utilitarian — a distinctly American attitude befitting a quintessentially American brand. And as his first jewelry collection proves, that high-low mashup is at the heart of the new Tiffany & Co. Called Paper Flowers, the recently-launched jewelry collection was inspired by the idea of creating delicate blossoms cut from paper and delicately pinned together. But, of course, the final products are far from pedestrian — petals of platinum, polished to a mirror finish, mingle with pavé diamonds and the occasional pop of tanzanite or sapphire. The collection’s breadth reaffirms Krakoff’s commitment to making Tiffany’s superlative wares accessible, ranging from a high-jewelry bib necklace featuring over 68 carats of pear-shaped and round brilliant diamonds to a dainty open-worked pendant that is effortless as can be. “Paper Flowers is about stripping away all of the rules associated with fine jewelry,” says Krakoff. “Luxury shouldn’t always mean formality.” To celebrate the launch, Tiffany painted its hometown in the brand’s signature robin’s egg blue. Everything from taxi cabs to corner bodegas were splashed with the hue, the bodega’s usual floral displays replaced with paper blooms. To cap it all off, a blowout bash at Tiffany’s iconic 5th Avenue flagship saw the store transformed into a funhouse of scenes from New York City streets. Graffitti-ed subway cars, newsstands and park benches — all in Tiffany blue, naturally — made for ample photo opportunities throughout two of the store’s six floors. At the end of the night, guests made their way to the ground-floor salon where a greenhouse had been erected to display the new jewels and A$AP Ferg gave a surprise performance. His hip-hop rendition of “Moon River”, the anthem from Breakfast at Tiffany’s, echoing throughout the store’s hallowed mahogany walls made it clear that this is not your grandmother’s Tiffany anymore.