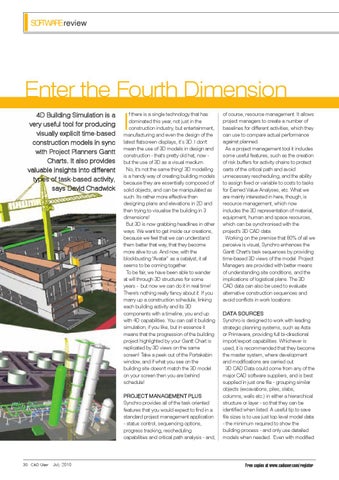 f there is a single technology that has dominated this year, not just in the construction industry, but entertainment, manufacturing and even the design of the latest flatscreen displays, it’s 3D. I don&#39;t mean the use of 3D models in design and construction - that&#39;s pretty old hat, now but the use of 3D as a visual medium. No, it&#39;s not the same thing! 3D modelling is a handy way of creating building models because they are essentially composed of solid objects, and can be manipulated as such. Its rather more effective than designing plans and elevations in 2D and then trying to visualise the building in 3 dimensions! But 3D is now grabbing headlines in other ways. We want to get inside our creations, because we feel that we can understand them better that way, that they become more alive to us. And now, with the blockbusting “Avatar” as a catalyst, it all seems to be coming together. To be fair, we have been able to wander at will through 3D structures for some years - but now we can do it in real time! There&#39;s nothing really fancy about it. If you marry up a construction schedule, linking each building activity and its 3D components with a timeline, you end up with 4D capabilities. You can call it building simulation, if you like, but in essence it means that the progression of the building project highlighted by your Gantt Chart is replicated by 3D views on the same screen! Take a peek out of the Portakabin window, and if what you see on the building site doesn&#39;t match the 3D model on your screen then you are behind schedule!

PROJECT MANAGEMENT PLUS Synchro provides all of the task oriented features that you would expect to find in a standard project management application - status control, sequencing options, progress tracking, rescheduling capabilities and critical path analysis - and,

of course, resource management. It allows project managers to create a number of baselines for different activities, which they can use to compare actual performance against planned. As a project management tool it includes some useful features, such as the creation of risk buffers for activity chains to protect oarts of the critical path and avoid unnecessary rescheduling, and the ability to assign fixed or variable to costs to tasks for Earned Value Analyses, etc. What we are mainly interested in here, though, is resource management, which now includes the 3D representation of material, equipment, human and space resources, which can be synchronised with the project&#39;s 3D CAD data. Working on the premise that 80% of all we perceive is visual, Synchro enhances the Gantt Chart&#39;s task sequences by providing time-based 3D views of the model. Project Managers are provided with better means of understanding site conditions, and the implications of logistical plans. The 3D CAD data can also be used to evaluate alternative construction sequences and avoid conflicts in work locations.

DATA SOURCES Synchro is designed to work with leading strategic planning systems, such as Asta or Primavera, providing full bi-directional import/export capabilities. Whichever is used, it is recommended that they become the master system, where development and modifications are carried out. 3D CAD Data could come from any of the major CAD software suppliers, and is best supplied in just one file - grouping similar objects (excavations, piles, slabs, columns, walls etc.) in either a hierarchical structure or layer - so that they can be identified when listed. A useful tip to save file sizes is to use just top level model data - the minimum required to show the building process - and only use detailed models when needed. Even with modified

Synchro 4D used on a hospital project files, you can still synchronise the data with the parent 3D model. Also, whereas Revit automatically generates hierarchical geometry structures, general modellers like AutoCAD will require some manual intervention - like naming layers, and so on. If you want the best &#39;visual experience&#39; as well, you should only use shaded 3D models for 4D simulation; text, hatchings and lines are not nearly so compelling. It also helps to name groups of 3D geometry objects, so that they can be identified when listed, although it is not essential, as Synchro also allows users to identify and assign resource objects to tasks through the 3D View.

SYNCHRONISING DATA To be able to work in conjunction with the Gantt Chart, the 3D Data has to be assigned as New Resources. If you are lucky and have well structured data then this can mostly be a an automatic process. The likelihood, though, is that the 3D geometry will have to be imported using &#39;No Assignment&#39;, and a structure of resources created manually. There is a Resource Wizard to guide you in this however, and will help select 3D objects and assign them using &#39;Assign to existing Resources&#39;. Managing the links between 3D data and Resources is critical, as they are independent of each other. This means that new 3D data may not be assigned to its Resources - but Resources will be attached to Tasks, and when Focus Time is run the 3D model will not update. You will have to manually reassign the data. Quite logical, really, when you think carefully about what it needs to work!

Synchro 4 keeping tabs on process plant development You also have to be careful when 3D geometry originates from more than one CAD system. You can &#39;modify&#39; the data in Synchro, but it is far better to ensure that a common scale, units and origin is agreed between all CAD systems supplying data for the Synchro model.

WBS VERSUS ACTIVITY CODE VIEW So now we have the 3D CAD Data assigned to Resources, which are going to be activated by Tasks, but we&#39;re not quite there yet. A Task on a Gantt Chart is not quite equivalent to the construction requirements that you would need to display within the 3D model. A single Task might take two or more steps to accomplish, and therefore has to be broken down further. Originally, Synchro used a strictly hierarchical and fixed model known as WBS (Work Breakdown Structure), which allowed sub-tasks to be created, enabling a task to show more detail. Some planning systems, though, use more powerful and flexible task representation, so Synchro enabled users to list tasks using Activity Code Values, which creates a number of coded subtasks within the first, and assigns the same Activity Code Values. Either system can be employed, but because of their structures, they will react differently when used to establish risk and costs in a process.

THE SYNCHRO INTERFACE Whilst I set out to play around with the software and give my impressions of how the user interface worked, I became much more fascinated by the implications of linking 3D CAD models to Project Planning

systems, and how Synchro has been able to keep the model in Synch with the planning process. The software comes with a very useful User Guide, that quickly helps you set up a typical Project Planning application, except that on the screen with the Gantt Chart, the Navigation panel and the Task properties, you have the 3D window which will display the progress in construction at any point in time. To complete the picture, there are just a couple of further points that have to be made. The first is how the building elements are displayed at different points in the construction cycle. Synchro colour codes these, allowing it to display an object in the process of installation, in situ, placed as a temporary item, or being removed, either before, during or after the task that it is related to. A combination that should cover any eventuality! The second aim is to be able to keep the 4D schedule in sync with the model, yet still be able to manage design revisions, retaining the assigned links. It can do this if the new model has the same objects and name as the original model. If there are new objects then, as we have seen above, they will need to be assigned manually (no more of a problem, really, than having to modify the task or activity details in a typical project planning application). An added bonus is that clash detection comes into its own! Not only does it point out where construction objects overlap, but applying a timeline ensures that the crane, shown as a temporary item, can be seen to be removed before the cement is poured where it stood! www.synchro.com 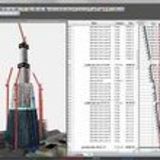