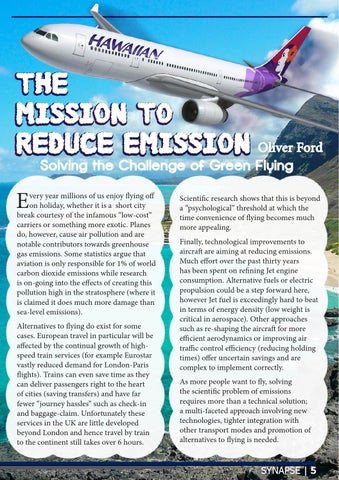 very year millions of us enjoy flying off on holiday, whether it is a short city break courtesy of the infamous “low-cost” carriers or something more exotic. Planes do, however, cause air pollution and are notable contributors towards greenhouse gas emissions. Some statistics argue that aviation is only responsible for 1% of world carbon dioxide emissions while research is on-going into the effects of creating this pollution high in the stratosphere (where it is claimed it does much more damage than sea-level emissions). Alternatives to flying do exist for some cases. European travel in particular will be affected by the continual growth of highspeed train services (for example Eurostar vastly reduced demand for London-Paris flights). Trains can even save time as they can deliver passengers right to the heart of cities (saving transfers) and have far fewer “journey hassles” such as check-in and baggage-claim. Unfortunately these services in the UK are little developed beyond London and hence travel by train to the continent still takes over 6 hours.

Scientific research shows that this is beyond a “psychological” threshold at which the time convenience of flying becomes much more appealing. Finally, technological improvements to aircraft are aiming at reducing emissions. Much effort over the past thirty years has been spent on refining Jet engine consumption. Alternative fuels or electric propulsion could be a step forward here, however Jet fuel is exceedingly hard to beat in terms of energy density (low weight is critical in aerospace). Other approaches such as re-shaping the aircraft for more efficient aerodynamics or improving air traffic control efficiency (reducing holding times) offer uncertain savings and are complex to implement correctly. As more people want to fly, solving the scientific problem of emissions requires more than a technical solution; a multi-faceted approach involving new technologies, tighter integration with other transport modes and promotion of alternatives to flying is needed.