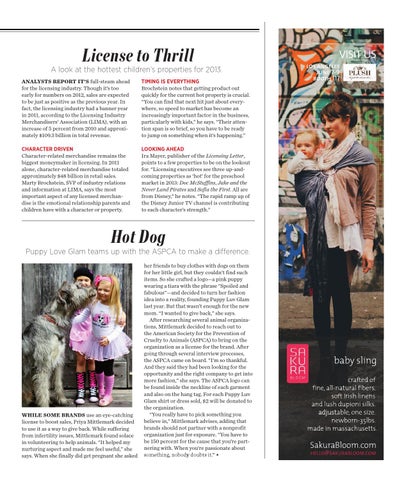 TIMING IS EVERYTHING Brochstein notes that getting product out quickly for the current hot property is crucial. â&#x20AC;&#x153;You can find that next hit just about everywhere, so speed to market has become an increasingly important factor in the business, particularly with kids,â&#x20AC;? he says. â&#x20AC;&#x153;Their attention span is so brief, so you have to be ready to jump on something when itâ&#x20AC;&#x2122;s happening.â&#x20AC;?

LOOKING AHEAD Ira Mayer, publisher of the Licensing Letter, points to a few properties to be on the lookout for. â&#x20AC;&#x153;Licensing executives see three up-andcoming properties as â&#x20AC;&#x2DC;hotâ&#x20AC;&#x2122; for the preschool market in 2013: Doc McStuffins, Jake and the Never Land Pirates and Sofia the First. All are from Disney,â&#x20AC;? he notes. â&#x20AC;&#x153;The rapid ramp up of the Disney Junior TV channel is contributing to each characterâ&#x20AC;&#x2122;s strength.â&#x20AC;?

Puppy Love Glam teams up with the ASPCA to make a difference.

WHILE SOME BRANDS use an eye-catching license to boost sales, Priya Mittlemark decided to use it as a way to give back. While suffering from infertility issues, Mittlemark found solace in volunteering to help animals. â&#x20AC;&#x153;It helped my nurturing aspect and made me feel useful,â&#x20AC;? she says. When she finally did get pregnant she asked 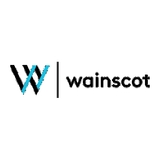