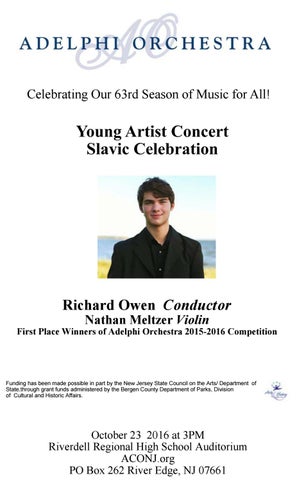 Celebrating Our 63rd Season of Music for All!

Funding has been made possible in part by the New Jersey State Council on the Arts/ Department of State,through grant funds administered by the Bergen County Department of Parks, Division of Cultural and Historic Affairs.

Partial funding is provided by the New Jersey State Council for the Arts through Grant Funds administered by the Bergen County Department of Parks, Division of Cultural and Historic Affairs

Please turn off all cell telephones, pagers or other audible electronic devices before the concert begins. Audio or video recording of any kind, or photography are not allowed during the performance without express permission from the Adelphi Chamber Orchestra.

Principal Conductor Richard Owen is celebrating his fifth season as conductor of the Adelphi Orchestra. Mo. Owen is known internationally as a gifted and visionary conductor for his innovative programming style and audience rapport. Combining a successful career as a conductor, entrepreneur, pianist and organist, Maestro Owen is also music director of Camerata NY Orchestra and St. Jean Baptiste Church (NYC). He was formerly on the conducting staff of the NY Philharmonic (cover conductor) as well as the Deutsche Oper am Rhein (Duessledorf). This season, Mr. Owen has a busy schedule which includes the Nutcracker with the Donetsk State Ballet, Scheherazade with the Adelphi Orchestra and Carmina Burana with Camerata New York and the NYC Masterchorale.Mo. Owen recently made several conducting debuts including with the Little Opera Theater of New York (Gluckâ&#x20AC;&#x2122;s The Reformed Drunkard), with Rioult Dance (M. Torkeâ&#x20AC;&#x2122;s Iphigenia) the Center for Contemporary Opera (Night of the Living Dead) and Carmina Burana with the Montreal Symphony, conducting alongside Mo. Kent Nagano. He has conducted symphony orchestras in Duisburg, Duesseldorf, Rzeszow, Jacksonville, Monterrey, Belgrade as well as the Staatskapelle Weimar, the Europa Symphony, the Silesian Philharmonic, the Baltic Opera and the Pacific Symphony. Mr. Owen graduated from Dartmouth College, where he was a recipient of a piano scholarship. He studied piano, accompanying and conducting at the Manhattan School of Music and at the University for Music and the Performing Arts in Vienna, Austria. A native New Yorker, Mr. Owen is committed to the cultural growth of the New York Metro/Northern New Jersey by presenting diverse repertoire to all generations.

Sixteen-year-old Nathan Meltzer studies with Itzhak Perlman and Li Lin at Juilliard Pre-College, where he is a Starling Delay scholar. Nathan has performed in Argentina, Austria, Brazil, Canada, Chile, Germany, Israel, and across the U.S., playing solo violin with the Berliner Symphoniker, the Bloomington Symphony, the Charlotte Civic Orchestra, the Evansville Philharmonic, the Indianapolis Symphony Orchestra, the Muncie Symphony, the Orquesta Sinfónica Concepción, and the Pittsburgh Symphony Orchestra. This season, Nathan joins the Omega Ensemble, solos with the Adelphi Orchestra and Ensemble 212, and returns to the Charlotte Civic Orchestra and the Orquesta Sinfónica Concepción. Nathan began his music education in a secondgrade orchestra class in Vienna, joined the “Violin Virtuosi” at Indiana University in 2011, and entered the Perlman Music Program in 2013. Nathan has played on NPR’s From the Top, most recently with Mark O’Connor, appeared with The Piano Guys at Carnegie Hall, performed with Gilles Apap, David Chan, and Augustine Hadelich, and taken lessons and masterclasses with Joshua Bell, Pamela Frank, and Jaime Laredo, among others. Nathan plays an 1844 Italian violin by Johannes Pressenda on generous loan from Juilliard.

Dvořák : Symphony No. 8 in G Major, Op. 88 After the crisis of the mid-1880s, represented above all by the sombre Seventh Symphony and the Piano Trio in F minor, the period during which Dvorak produced his Eighth Symphony was now a time of equilibrium, when the composer sought the answers to fundamental issues of human existence. The work was written during the summer and early autumn of 1889, mainly at his summer residence in Vysoka. This environment, in which Dvorak was most at ease, seemed to be reflected in the overall atmosphere of his new symphony. Here he created a work filled with the joys of life and his admiration for natural beauty and, once again, the piece reveals the composer’s fondness for Czech and Slavonic folk music. Dvorak’s Symphony No. 8 is characteristic for its variable moods, which follow one another in a colourful sequence of pastoral images, then dance and march temperaments, and finally passages of heightened drama. In terms of its thematic material, the work is marked by a cantabile style whose clear-cut contours and largely diatonic progressions are more typical of a vocal, rather than instrumental, type of melody. Sibelius: Violin Concerto In D Minor, Opus 47 The Sibelius Violin Concerto’s composition and premiere was a turbulent path filled with delays, disasters, and ill-will. In 1903, Sibelius was in one of his more compositionally prolific periods, but he was troubled. Tales of alcoholism, or at least drinking far too much, are rampant, and there is an anecdote that his wife had to go searching for him at a local pub to prompt him to finish writing the third movement for the Violin Concerto’s premiere. Sibelius originally had planned to dedicate the work to the esteemed German violinist, Willy Burmester, who had agreed to premiere it in Berlin. Sibelius then decided he wanted the premiere to be in Helsinki, which is understandable, as it was financially beneficial for him and he was Finland’s preeminent nationalist composer. What is not understandable is why Sibelius chose to schedule the premiere when Burmester was unavailable. The premiere was held in November of 1904 with Sibelius conducting and a new soloist, Victor Novacek, a violinist with far less performance experience than that of Burmester. The premiere was nothing short of a disaster, with a trifecta of issues: an inexperienced soloist, his inability to prepare properly because the Concerto was not finished in a timely manner, and the resultant work was one of the most virtuosic concertos ever to be written. The failed outcome is not surprising. Sibelius withdrew the work and spent the next year revising it. The new version premiered in Berlin in October 1905, again at a time when its intended dedicatee, Burmester, was unavailable. Sibelius then asked Karel Halíř to be the soloist for his revamped Violin Concerto while Richard Strauss was the conductor. Burmester was so incensed by this slight that he vowed to never play Sibelius’s Violin Concerto, making him no longer a suitable candidate for the work’s dedication. Sibelius settled on a young prodigy by the name of Ferenc von Vecsey, age twelve, to dedicate his new work. Sibelius does not rely on the traditional orchestra and soloist prototypes in his Violin Concerto. There is hardly any musical conversation between the two forces, unlike most Romantic works for violin and orchestra. The orchestra and soloist rarely share melodic material, and while there are some splendid moments for the orchestra.

Smetana: The Moldau Smetana came to his patriotic pinnacle only through a circuitous route and a devastating personal crisis. After passing through a half-dozen schools, he dropped out at age 16 to join a quartet. Like his idol Liszt, he first struggled to establish and sustain careers as a traveling piano virtuoso and revered teacher. Although born and raised in Bohemia, he felt unappreciated in his native Prague and in his early thirties he left for a teaching and performing position in Gรถteborg, Sweden. It was during his five-years there that he became transformed and inspired by powerful feelings toward the country he had left behind. He sublimated his intense homesickness to learn to write in Czech (having been taught in German, as was customary among the educated classes in Prague), produced several orchestral pieces based on historical legend (encouraged by and modeled after Liszt) and became an ardent proselytizer for his country's culture. a sterling example of this is his composition entitled Ma Vlast (My country). The most popular of the six movements, often heard on its own, is "Vlavta" ("The Moldau"), a vivid portrait of Bohemia's mighty river from source to end. Smetana conceived the seminal idea for the opening during an 1867 picnic at the conjunction of the two mountain brooks, which he depicts with flutes and clarinets, each gurgling in constant motion, as pizzicato strings highlight glints of sunlight on the rippling surface trickling over the rocks. The brooks coalesce into a swift stream whose lovely melody may sound familiar, as it's derived from the same folk source as "Hatikva," the Zionist, and now Israeli, national anthem. As the river swells and courses through the countryside, we hear hunting horns, a wedding dance, nocturnal nymphs, foaming rapids and a majestic flow past Prague before disappearing

The Adelphi Orchestra Wishes to express its gratitude to all of its volunteers, friends, individuals, corporate and foundation donors, advertisers RIVERDELL BOARD OF EDUCATION The Staff at Riverdell High School Michael OReilly, Claudia Cutri Esther Kashkin, Jay VandeKopple, Sylvia Rubin, Michael Peng, Alexandra Bernstein, David Rubin For helping make all our programs possible we are looking forward to sharing more music with you this

—————————————————————————The Adelphi Orchestra (AO) is a professional, non-profit orchestra offering symphony, chamber and educational concert programs in Northern New Jersey and the New York metropolitan area, presenting concerts with accomplished national and international guest soloists and distinguished conductors. Nominated for the 2016 Jersey Arts People’s Choice Award in the Favorite Orchestra/Symphony Division, the Adelphi Orchestra is distinguished as northern New Jersey’s longest continuously performing orchestra and has been a proud member of the New Jersey cultural community for 62 years. . The AO has been a recipient of a Bergen County Arts Grant since 2006 and received a certificate of commendation in recognition of its constant commitment and dedication to the residents and communities in Bergen County. The Orchestra is a member of the League of Orchestras.

Innovative programs, world-class conductors and soloists, and great music for our community! The AO operates on a lean budget. Your generous contributions allow us to continue to give the gift of music! 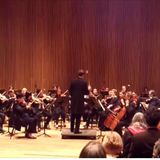