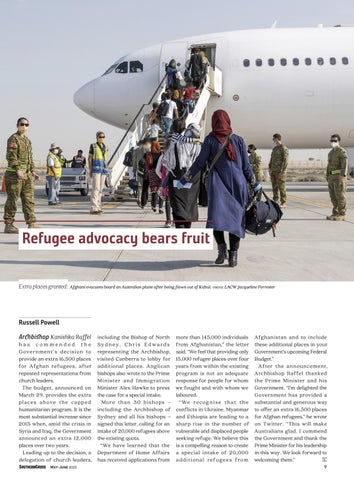 Russell Powell Archbishop Kanishka Raffel including the Bishop of North more than 145,000 individuals Afghanistan and to include

h a s c o m m e n d e d t h e Sydney, Chris Edwards Government’s decision to representing the Archbishop, provide an extra 16,500 places visited Canberra to lobby for for Afghan refugees, after additional places. Anglican repeated representations from bishops also wrote to the Prime church leaders. Minister and Immigration The budget, announced on Minister Alex Hawke to press March 29, provides the extra the case for a special intake. p l a c e s a b o ve t h e c a p p e d More th an 30 bishops – humanitarian program. It is the including the Archbishop of most substantial increase since Sydney and all his bishops – 2015 when, amid the crisis in signed this letter, calling for an Syria and Iraq, the Government intake of 20,000 refugees above announced an extra 12,000 the existing quota. places over two years. “We have learned that the Leading up to the decision, a Department of Home Affairs delegation of church leaders, has received applications from SouthernCross

from Afghanistan,” the letter said. “We feel that providing only 15,000 refugee places over four years from within the existing program is not an adequate response for people for whom we fought and with whom we laboured. “ We re c o g n i s e t h a t t h e conflicts in Ukraine, Myanmar and Ethiopia are leading to a sharp rise in the number of vulnerable and displaced people seeking refuge. We believe this is a compelling reason to create a special intake of 20,000 a d di t io n al re fu ge e s f ro m

these additional places in your Government’s upcoming Federal Budget.” After the announcement, Archbishop Raffel thanked the Prime Minister and his Government. “I’m delighted the Government has provided a substantial and generous way to offer an extra 16,500 places for Afghan refugees,” he wrote on Twitter. “This will make Australians glad. I commend the Government and thank the Prime Minister for his leadership in this way. We look forward to welcoming them.” SC 9