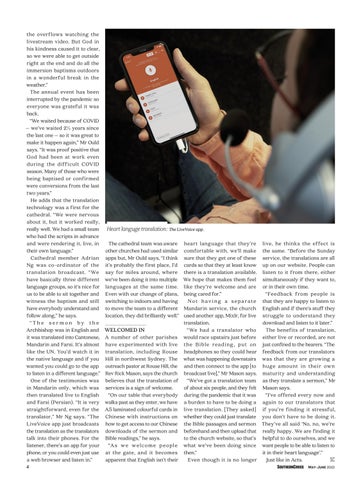 the overflows watching the livestream video. But God in his kindness caused it to clear, so we were able to get outside right at the end and do all the immersion baptisms outdoors in a wonderful break in the weather.” The annual event has been interrupted by the pandemic so everyone was grateful it was back. “We waited because of COVID – we’ve waited 2½ years since the last one – so it was great to make it happen again,” Mr Ould says. “It was proof positive that God had been at work even during the difficult COVID season. Many of those who were being baptised or confirmed were conversions from the last two years.” He adds that the translation technology was a first for the cathedral. “We were nervous about it, but it worked really, really well. We had a small team who had the scripts in advance and were rendering it, live, in their own language.” Cathedral member Adrian Ng was co-ordinator of the translation broadcast. “We have basically three different language groups, so it’s nice for us to be able to sit together and witness the baptism and still have everybody understand and follow along,” he says. “The sermon by the Archbishop was in English and it was translated into Cantonese, Mandarin and Farsi. It’s almost like the UN. You’d watch it in the native language and if you wanted you could go to the app to listen in a different language.” One of the testimonies was in Mandarin only, which was then translated live to English and Farsi (Persian). “It is very straightforward, even for the translator,” Mr Ng says. “The LiveVoice app just broadcasts the translation as the translators talk into their phones. For the listener, there’s an app for your phone, or you could even just use a web browser and listen in.” 4

Heart languge translation: The LiveVoice app. The cathedral team was aware other churches had used similar apps but, Mr Ould says, “I think it’s probably the first place, I’d say for miles around, where we’ve been doing it into multiple languages at the same time. Even with our change of plans, switching to indoors and having to move the team to a different location, they did brilliantly well.”

heart language that they’re comfortable with, we’ll make sure that they get one of these cards so that they at least know there is a translation available. We hope that makes them feel like they’re welcome and are being cared for.” Not having a separate Mandarin service, the church used another app, Mixlr, for live translation. WELCOMED IN “We had a translator who A number of other parishes would race upstairs just before have experimented with live the Bible rea din g, put on translation, including Rouse headphones so they could hear Hill in northwest Sydney. The what was happening downstairs outreach pastor at Rouse Hill, the and then connect to the app [to Rev Rick Mason, says the church broadcast live],” Mr Mason says. believes that the translation of “We’ve got a translation team services is a sign of welcome. of about six people, and they felt “On our table that everybody during the pandemic that it was walks past as they enter, we have a burden to have to be doing a A5 laminated colourful cards in live translation. [They asked] Chinese with instructions on whether they could just translate how to get access to our Chinese the Bible passages and sermon downloads of the sermon and beforehand and then upload that Bible readings,” he says. to the church website, so that’s “A s w e w e l co m e p e o p l e what we’ve been doing since at the gate, and it becomes then.” apparent that English isn’t their Even though it is no longer

live, he thinks the effect is the same. “Before the Sunday service, the translations are all up on our website. People can listen to it from there, either simultaneously if they want to, or in their own time. “Feedback from people is that they are happy to listen to English and if there’s stuff they struggle to understand they download and listen to it later.” The benefits of translation, either live or recorded, are not just confined to the hearers. “The feedback from our translators was that they are growing a huge amount in their own maturity and understanding as they translate a sermon,” Mr Mason says. “I’ve offered every now and again to our translators that if you’re finding it stressful, you don’t have to be doing it. They’ve all said ‘No, no, we’re really happy. We are finding it helpful to do ourselves, and we want people to be able to listen to it in their heart language’.” Just like in Acts. SC SouthernCross