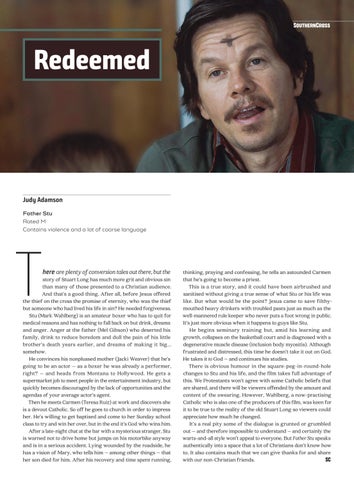 here are plenty of conversion tales out there, but the

story of Stuart Long has much more grit and obvious sin than many of those presented to a Christian audience. And that’s a good thing. After all, before Jesus offered the thief on the cross the promise of eternity, who was the thief but someone who had lived his life in sin? He needed forgiveness. Stu (Mark Wahlberg) is an amateur boxer who has to quit for medical reasons and has nothing to fall back on but drink, dreams and anger. Anger at the father (Mel Gibson) who deserted his family, drink to reduce boredom and dull the pain of his little brother’s death years earlier, and dreams of making it big... somehow. He convinces his nonplussed mother (Jacki Weaver) that he’s going to be an actor – as a boxer he was already a performer, right? – and heads from Montana to Hollywood. He gets a supermarket job to meet people in the entertainment industry, but quickly becomes discouraged by the lack of opportunities and the agendas of your average actor’s agent. Then he meets Carmen (Teresa Ruiz) at work and discovers she is a devout Catholic. So off he goes to church in order to impress her. He’s willing to get baptised and come to her Sunday school class to try and win her over, but in the end it’s God who wins him. After a late-night chat at the bar with a mysterious stranger, Stu is warned not to drive home but jumps on his motorbike anyway and is in a serious accident. Lying wounded by the roadside, he has a vision of Mary, who tells him – among other things – that her son died for him. After his recovery and time spent running,

thinking, praying and confessing, he tells an astounded Carmen that he’s going to become a priest. This is a true story, and it could have been airbrushed and sanitised without giving a true sense of what Stu or his life was like. But what would be the point? Jesus came to save filthymouthed heavy drinkers with troubled pasts just as much as the well-mannered rule keeper who never puts a foot wrong in public. It’s just more obvious when it happens to guys like Stu. He begins seminary training but, amid his learning and growth, collapses on the basketball court and is diagnosed with a degenerative muscle disease (inclusion body myositis). Although frustrated and distressed, this time he doesn’t take it out on God. He takes it to God – and continues his studies. There is obvious humour in the square-peg-in-round-hole changes to Stu and his life, and the film takes full advantage of this. We Protestants won’t agree with some Catholic beliefs that are shared, and there will be viewers offended by the amount and content of the swearing. However, Wahlberg, a now-practising Catholic who is also one of the producers of this film, was keen for it to be true to the reality of the old Stuart Long so viewers could appreciate how much he changed. It’s a real pity some of the dialogue is grunted or grumbled out – and therefore impossible to understand – and certainly the warts-and-all style won’t appeal to everyone. But Father Stu speaks authentically into a space that a lot of Christians don’t know how to. It also contains much that we can give thanks for and share with our non-Christian friends. SC