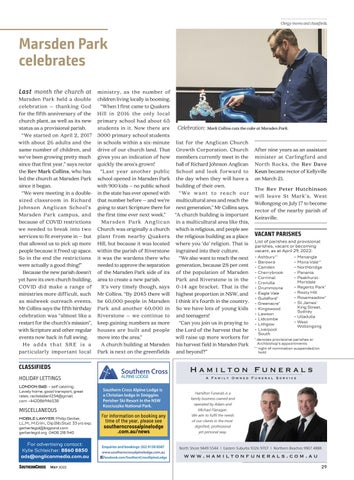 Marsdn aP rk cbras Last month the church at ministry, as the number of

Marsden Park held a double celebration – thanking God for the fifth anniversary of the church plant, as well as its new status as a provisional parish. “We started on April 2, 2017 with about 26 adults and the same number of children, and we’ve been growing pretty much since that first year,” says rector the Rev Mark Collins, who has led the church at Marsden Park since it began. “We were meeting in a doublesized classroom in Richard Johnson Anglican Scho ol’s Marsden Park campus, and because of COVID restrictions we needed to break into two services to fit everyone in – but that allowed us to pick up more people because it freed up space. So in the end the restrictions were actually a good thing!” Because the new parish doesn’t yet have its own church building, COVID did make a range of ministries more difficult, such as midweek outreach events. Mr Collins says the fifth birthday celebration was “almost like a restart for the church’s mission”, with Scripture and other regular events now back in full swing. He adds that SRE is a particularly important local

children living locally is booming. “When I first came to Quakers Hill in 2016 the only lo cal primary school had about 65 students in it. Now there are 3000 primary school students in schools within a six-minute drive of our church land. That gives you an indication of how quickly the area’s grown! “Last year another public school opened in Marsden Park with 900 kids – no public school in the state has ever opened with that number before – and we’re going to start Scripture there for the first time ever next week.” M a rs de n P a r k A n g l i c a n Church was originally a church plant from nearby Quakers Hill, but because it was located within the parish of Riverstone it was the wardens there who needed to approve the separation of the Marsden Park side of its area to create a new parish. It’s very timely though, says Mr Collins. “By 2045 there will be 60,000 people in Marsden Park and another 60,000 in Riverstone – we continue to keep gaining numbers as more houses are built and people move into the area.” A church building at Marsden Park is next on the greenfields

Celebration: Mark Collins cuts the cake at Marsden Park. list for the Anglican Church Growth Corporation. Church After nine years as an assistant members currently meet in the minister at Carlingford and hall of Richard Johnson Anglican North Rocks, the Rev Dave School and look forward to Keun became rector of Kellyville the day when they will have a on March 21. building of their own. The Rev Peter Hutchinson “ We w a n t t o r e a c h o u r will leave St Mark’s, West multicultural area and reach the Wollongong on July 17 to become next generation,” Mr Collins says. rector of the nearby parish of “A church building is important Keiraville. in a multicultural area like this, which is religious, and people see the religious building as a place VACANT PARISHES List of parishes and provisional where you ‘do’ religion. That is parishes, vacant or becoming vacant, as at April 29, 2022: ingrained into their culture. • Menangle “We also want to reach the next • Ashbury** • Berowra • Mona Vale** generation, because 28 per cent • Camden • Northbridge • Panania of the population of Marsden • Cherrybrook • PeakhurstPark and Riverstone is in the • Corrimal Mortdale • Cronulla 0-14 age bracket. That is the • Drummoyne • Regents Park* • Rooty Hill highest proportion in NSW, and • Eagle Vale • Rosemeadow* • Guildford* I think it’s fourth in the country. • Greenacre* • St James’ King Street, So we have lots of young kids • Kingswood Sydney • Lawson and teenagers! • Ulladulla • Lidcombe • West “Can you join us in praying to • Lithgow Wollongong the Lord of the harvest that he • Liverpool South will raise up more workers for * denotes provisional parishes or Archbishop’s appointments his harvest field in Marsden Park ** right of nomination suspended/on and beyond?” hold