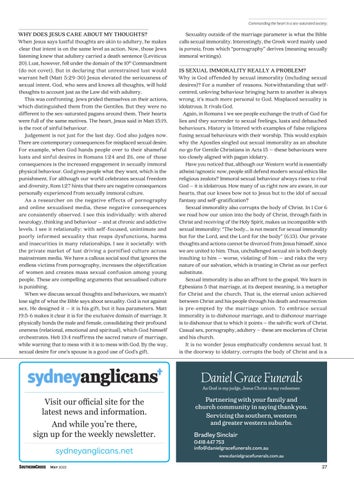 WHY DOES JESUS CARE ABOUT MY THOUGHTS? When Jesus says lustful thoughts are akin to adultery, he makes clear that intent is on the same level as action. Now, those Jews listening knew that adultery carried a death sentence (Leviticus 20). Lust, however, fell under the domain of the 10th Commandment (do not covet). But in declaring that unrestrained lust would warrant hell (Matt 5:29-30) Jesus elevated the seriousness of sexual intent. God, who sees and knows all thoughts, will hold thoughts to account just as the Law did with adultery. This was confronting. Jews prided themselves on their actions, which distinguished them from the Gentiles. But they were no different to the sex-saturated pagans around them. Their hearts were full of the same motives. The heart, Jesus said in Matt 15:19, is the root of sinful behaviour. Judgement is not just for the last day. God also judges now. There are contemporary consequences for misplaced sexual desire. For example, when God hands people over to their shameful lusts and sinful desires in Romans 1:24 and 26, one of those consequences is the increased engagement in sexually immoral physical behaviour. God gives people what they want, which is the punishment. For although our world celebrates sexual freedom and diversity, Rom 1:27 hints that there are negative consequences personally experienced from sexually immoral culture. As a researcher on the negative effects of pornography and online sexualised media, these negative consequences are consistently observed. I see this individually: with altered neurology, thinking and behaviour – and at chronic and addictive levels. I see it relationally: with self-focused, unintimate and poorly informed sexuality that reaps dysfunctions, harms and insecurities in many relationships. I see it societally: with the private market of lust driving a pornified culture across mainstream media. We have a callous social soul that ignores the endless victims from pornography, increases the objectification of women and creates mass sexual confusion among young people. These are compelling arguments that sexualised culture is punishing. When we discuss sexual thoughts and behaviours, we mustn’t lose sight of what the Bible says about sexuality. God is not against sex. He designed it – it is his gift, but it has parameters. Matt 19:5-6 makes it clear it is for the exclusive domain of marriage. It physically bonds the male and female, consolidating their profound oneness (relational, emotional and spiritual), which God himself orchestrates. Heb 13:4 reaffirms the sacred nature of marriage, while warning that to mess with it is to mess with God. By the way, sexual desire for one’s spouse is a good use of God’s gift.

Sexuality outside of the marriage parameter is what the Bible calls sexual immorality. Interestingly, the Greek word mainly used is porneia, from which “pornography” derives (meaning sexually immoral writings).

IS SEXUAL IMMORALITY REALLY A PROBLEM?

Why is God offended by sexual immorality (including sexual desires)? For a number of reasons. Notwithstanding that selfcentred, unloving behaviour bringing harm to another is always wrong, it’s much more personal to God. Misplaced sexuality is idolatrous. It rivals God. Again, in Romans 1 we see people exchange the truth of God for lies and they surrender to sexual feelings, lusts and debauched behaviours. History is littered with examples of false religions fusing sexual behaviours with their worship. This would explain why the Apostles singled out sexual immorality as an absolute no-go for Gentile Christians in Acts 15 – these behaviours were too closely aligned with pagan idolatry. Have you noticed that, although our Western world is essentially atheist/agnostic now, people still defend modern sexual ethics like religious zealots? Immoral sexual behaviour always rises to rival God – it is idolatrous. How many of us right now are aware, in our hearts, that our knees bow not to Jesus but to the idol of sexual fantasy and self-gratification? Sexual immorality also corrupts the body of Christ. In 1 Cor 6 we read how our union into the body of Christ, through faith in Christ and receiving of the Holy Spirit, makes us incompatible with sexual immorality: “The body... is not meant for sexual immorality but for the Lord, and the Lord for the body” (6:13). Our private thoughts and actions cannot be divorced from Jesus himself, since we are united to him. Thus, unchallenged sexual sin is both deeply insulting to him – worse, violating of him – and risks the very nature of our salvation, which is trusting in Christ as our perfect substitute. Sexual immorality is also an affront to the gospel. We learn in Ephesians 5 that marriage, at its deepest meaning, is a metaphor for Christ and the church. That is, the eternal union achieved between Christ and his people through his death and resurrection is pre-empted by the marriage union. To embrace sexual immorality is to dishonour marriage, and to dishonour marriage is to dishonour that to which it points – the salvific work of Christ. Casual sex, pornography, adultery – these are mockeries of Christ and his church. It is no wonder Jesus emphatically condemns sexual lust. It is the doorway to idolatry, corrupts the body of Christ and is a

Daniel Grace Funerals As God is my judge, Jesus Christ is my redeemer.

Visit our official site for the latest news and information. And while you’re there, sign up for the weekly newsletter. sydneyanglicans.net SouthernCross

Partnering with your family and church community in saying thank you. Servicing the southern, western and greater western suburbs. Bradley Sinclair