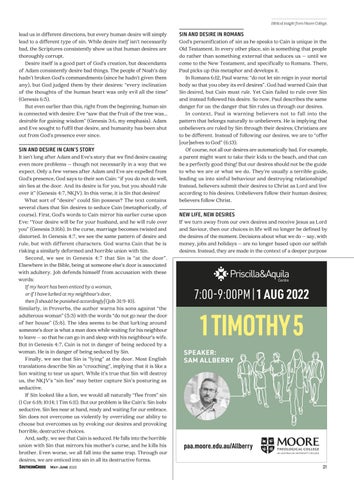 lead us in different directions, but every human desire will simply lead to a different type of sin. While desire itself isn’t necessarily bad, the Scriptures consistently show us that human desires are thoroughly corrupt. Desire itself is a good part of God’s creation, but descendants of Adam consistently desire bad things. The people of Noah’s day hadn’t broken God’s commandments (since he hadn’t given them any), but God judged them by their desires: “every inclination of the thoughts of the human heart was only evil all the time” (Genesis 6:5). But even earlier than this, right from the beginning, human sin is connected with desire: Eve “saw that the fruit of the tree was... desirable for gaining wisdom” (Genesis 3:6, my emphasis). Adam and Eve sought to fulfil that desire, and humanity has been shut out from God’s presence ever since. SIN AND DESIRE IN CAIN’S STORY It isn’t long after Adam and Eve’s story that we find desire causing even more problems – though not necessarily in a way that we expect. Only a few verses after Adam and Eve are expelled from God’s presence, God says to their son Cain: “if you do not do well, sin lies at the door. And its desire is for you, but you should rule over it” (Genesis 4:7, NKJV). In this verse, it is Sin that desires! What sort of “desire” could Sin possess? The text contains several clues that Sin desires to seduce Cain (metaphorically, of course). First, God’s words to Cain mirror his earlier curse upon Eve: “Your desire will be for your husband, and he will rule over you” (Genesis 3:16b). In the curse, marriage becomes twisted and distorted. In Genesis 4:7, we see the same pattern of desire and rule, but with different characters. God warns Cain that he is risking a similarly deformed and horrible union with Sin. Second, we see in Genesis 4:7 that Sin is “at the door”. Elsewhere in the Bible, being at someone else’s door is associated with adultery. Job defends himself from accusation with these words: If my heart has been enticed by a woman, or if I have lurked at my neighbour’s door, then [I should be punished accordingly] (Job 31:9-10). Similarly, in Proverbs, the author warns his sons against “the adulterous woman” (5:3) with the words “do not go near the door of her house” (5:8). The idea seems to be that lurking around someone’s door is what a man does while waiting for his neighbour to leave – so that he can go in and sleep with his neighbour’s wife. But in Genesis 4:7, Cain is not in danger of being seduced by a woman. He is in danger of being seduced by Sin. Finally, we see that Sin is “lying” at the door. Most English translations describe Sin as “crouching”, implying that it is like a lion waiting to tear us apart. While it’s true that Sin will destroy us, the NKJV’s “sin lies” may better capture Sin’s posturing as seductive. If Sin looked like a lion, we would all naturally “flee from” sin (1 Cor 6:18; 10:14; 1 Tim 6:11). But our problem is like Cain’s: Sin looks seductive. Sin lies near at hand, ready and waiting for our embrace. Sin does not overcome us violently by overriding our ability to choose but overcomes us by evoking our desires and provoking horrible, destructive choices. And, sadly, we see that Cain is seduced. He falls into the horrible union with Sin that mirrors his mother’s curse, and he kills his brother. Even worse, we all fall into the same trap. Through our desires, we are enticed into sin in all its destructive forms. SouthernCross

SIN AND DESIRE IN ROMANS God’s personification of sin as he speaks to Cain is unique in the Old Testament. In every other place, sin is something that people do rather than something external that seduces us – until we come to the New Testament, and specifically to Romans. There, Paul picks up this metaphor and develops it. In Romans 6:12, Paul warns: “do not let sin reign in your mortal body so that you obey its evil desires”. God had warned Cain that Sin desired, but Cain must rule. Yet Cain failed to rule over Sin and instead followed his desire. So now, Paul describes the same danger for us: the danger that Sin rules us through our desires. In context, Paul is warning believers not to fall into the pattern that belongs naturally to unbelievers. He is implying that unbelievers are ruled by Sin through their desires; Christians are to be different. Instead of following our desires, we are to “offer [our]selves to God” (6:13). Of course, not all our desires are automatically bad. For example, a parent might want to take their kids to the beach, and that can be a perfectly good thing! But our desires should not be the guide to who we are or what we do. They’re usually a terrible guide, leading us into sinful behaviour and destroying relationships! Instead, believers submit their desires to Christ as Lord and live according to his desires. Unbelievers follow their human desires; believers follow Christ. NEW LIFE, NEW DESIRES If we turn away from our own desires and receive Jesus as Lord and Saviour, then our choices in life will no longer be defined by the desires of the moment. Decisions about what we do – say, with money, jobs and holidays – are no longer based upon our selfish desires. Instead, they are made in the context of a deeper purpose