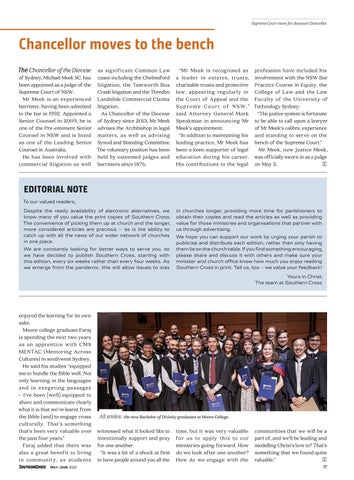 of Sydney, Michael Meek SC, has cases including the Chelmsford been appointed as a judge of the litigation, the Tamworth Bus Supreme Court of NSW. Crash litigation and the Thredbo Mr Meek is an experienced Landslide Commercial Claims barrister, having been admitted litigation. to the bar in 1992. Appointed a As Chancellor of the Diocese Senior Counsel in 2009, he is of Sydney since 2013, Mr Meek one of the Pre-emiment Senior advises the Archbishop in legal Counsel in NSW and is listed matters, as well as advising as one of the Leading Senior Synod and Standing Committee. Counsel in Australia. The voluntary position has been He has been involved with held by esteemed judges and commercial litigation as well barristers since 1876.

“Mr Meek is recognised as a leader in estates, trusts, charitable trusts and protective law, appearing regularly in the Court of Appeal and the S u p re m e C o u r t o f N S W , ” said Attorney General Mark Speakman in announcing Mr Meek’s appointment. “In addition to maintaining his leading practice, Mr Meek has been a keen supporter of legal education during his career. His contributions to the legal

profession have included his involvement with the NSW Bar Practice Course in Equity, the College of Law and the Law Faculty of the University of Technology Sydney. “The justice system is fortunate to be able to call upon a lawyer of Mr Meek’s calibre, experience and standing to serve on the bench of the Supreme Court.” Mr Meek, now Justice Meek, was officially sworn in as a judge on May 5. SC

EDITORIAL NOTE To our valued readers, Despite the ready availability of electronic alternatives, we know many of you value the print copies of Southern Cross The convenience of picking them up at church and the longer, more considered articles are precious – as is the ability to catch up with all the news of our wider network of churches in one place. We are constantly looking for better ways to serve you, so we have decided to publish Southern Cross , starting with this edition, every six weeks rather than every four weeks. A s we emerge from the pandemic, this will allow issues to stay

in churches longer, providing more time for parishioners to obtain their copies and read the articles as well as providing value for those ministries and organisations that partner with us through advertising. We hope you can support our work by urging your parish to publicise and distribute each edition, rather than only having them lie on the church table. If you ffnd something encouraging, please share and discuss it with others and make sure your minister and church oce know how much you enjoy reading Southern Cross in print. Tell us, too – we value your feedback! The team at

enjoyed the learning for its own sake. Moore college graduate Faraj is spending the next two years as an apprentice with CMS MENTAC (Mentoring Across Cultures) in southwest Sydney. He said his studies “equipped me to handle the Bible well. Not only learning in the languages and in exegeting passages – I’ve been [well] equipped to share and communicate clearly what it is that we’ve learnt from the Bible [and] to engage cross All smiles: the new Bachelor of Divinity graduates at Moore College. culturally. That’s something that’s been very valuable over witnessed what it looked like to time, but it was very valuable communities that we will be a the past four years.” intentionally support and pray for us to apply this to our part of, and we’ll be leading and Faraj added that there was for one another. ministries going forward. How modelling Christ’s love to? That’s also a great benefit to living “It was a bit of a shock at first do we look after one another? something that we found quite in community, as students to have people around you all the How do we engage with the valuable.” SC SouthernCross