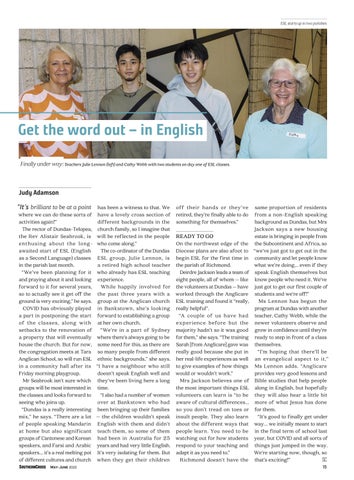 ESL starts up in two parishes

Judy Adamson “It’s brilliant to be at a point has been a witness to that. We off their hands or they’ve same proportion of residents where we can do these sorts of activities again!” The rector of Dundas-Telopea, the Rev Alistair Seabrook, is enthusing about the longawaited start of ESL (English as a Second Language) classes in the parish last month. “We’ve been planning for it and praying about it and looking forward to it for several years, so to actually see it get off the ground is very exciting,” he says. COVID has obviously played a part in postponing the start of the classes, along with setbacks to the renovation of a property that will eventually house the church. But for now, the congregation meets at Tara Anglican School, so will run ESL in a community hall after its Friday morning playgroup. Mr Seabrook isn’t sure which groups will be most interested in the classes and looks forward to seeing who joins up. “Dundas is a really interesting mix,” he says. “There are a lot of people speaking Mandarin at home but also significant groups of Cantonese and Korean speakers, and Farsi and Arabic speakers... it’s a real melting pot of different cultures and church SouthernCross

have a lovely cross section of different backgrounds in the church family, so I imagine that will be reflected in the people who come along.” The co-ordinator of the Dundas ESL group, Julie Lennon, is a retired high school teacher who already has ESL teaching experience. While happily involved for the past three years with a group at the Anglican church in Bankstown, she’s looking forward to establishing a group at her own church. “We’re in a part of Sydney where there’s always going to be some need for this, as there are so many people from different ethnic backgrounds,” she says. “I have a neighbour who still doesn’t speak English well and they’ve been living here a long time. “I also had a number of women over at Bankstown who had been bringing up their families – the children wouldn’t speak English with them and didn’t teach them, so some of them had been in Australia for 25 years and had very little English. It’s very isolating for them. But when they get their children

retired, they’re finally able to do something for themselves.”

READY TO GO On the northwest edge of the Diocese plans are also afoot to begin ESL for the first time in the parish of Richmond. Deirdre Jackson leads a team of eight people, all of whom – like the volunteers at Dundas – have worked through the Anglicare ESL training and found it “really, really helpful”. “A couple of us have had exp erience before but the majority hadn’t so it was good for them,” she says. “The training Sarah [from Anglicare] gave was really good because she put in her real-life experiences as well to give examples of how things would or wouldn’t work.” Mrs Jackson believes one of the most important things ESL volunteers can learn is “to be aware of cultural differences... so you don’t tread on toes or insult people. They also learn about the different ways that people learn. You need to be watching out for how students respond to your teaching and adapt it as you need to.” Richmond doesn’t have the

from a non-English speaking background as Dundas, but Mrs Jackson says a new housing estate is bringing in people from the Subcontinent and Africa, so “we’ve just got to get out in the community and let people know what we’re doing... even if they speak English themselves but know people who need it. We’ve just got to get our first couple of students and we’re off!” Ms Lennon has begun the program at Dundas with another teacher, Cathy Webb, while the newer volunteers observe and grow in confidence until they’re ready to step in front of a class themselves. “I’m hoping that there’ll be an evangelical aspect to it,” Ms Lennon adds. “Anglicare provides very good lessons and Bible studies that help people along in English, but hopefully they will also hear a little bit more of what Jesus has done for them. “It’s good to finally get under way... we initially meant to start in the final term of school last year, but COVID and all sorts of things just jumped in the way. We’re starting now, though, so that’s exciting!” SC 15