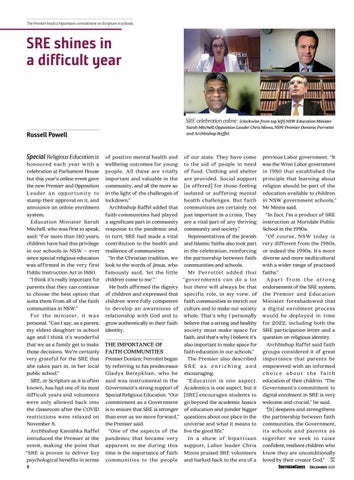 The Premier leads a bipartisan commitment on Scripture in schools.

SRE shines in a difficult year

Special Religious Education is of positive mental health and of our state. They have come previous Labor government. “It honoured each year with a wellbeing outcomes for young to the aid of people in need celebration at Parliament House people. All these are vitally of food. Clothing and shelter but this year’s online event gave important and valuable in the are provided. Social support the new Premier and Opposition community, and all the more so [is offered] for those feeling Lea der an opp or tunit y to in the light of the challenges of isolated or suffering mental stamp their approval on it, and lockdown.” health challenges. But faith announce an online enrolment Archbishop Raffel added that communities are certainly not system. faith communities had played just important in a crisis. They Education Minister Sarah a significant part in community are a vital part of any thriving Mitchell, who was first to speak, response to the pandemic and, community and society.” said: “For more than 140 years, in turn, SRE had made a vital Representatives of the Jewish children have had this privilege contribution to the health and and Islamic faiths also took part in our schools in NSW – ever resilience of communities. in the celebration, reinforcing since special religious education “In the Christian tradition, we the partnership between faith was affirmed in the very first look to the words of Jesus, who communities and schools. Public Instruction Act in 1880. famously said, ‘let the little Mr P errottet a dde d th at “I think it’s really important for children come to me’.” “governments can do a lot parents that they can continue He both affirmed the dignity but there will always be that to choose the best option that of children and expressed that specific role, in my view, of suits them from all of the faith children were fully competent faith communities to enrich our communities in NSW.” to develop an awareness of culture and to make our society For the minister, it wa s relationship with God and to whole. That’s why I personally personal. “Can I say, as a parent, grow authentically in their faith believe that a strong and healthy my eldest daughter is school identity. society must make space for age and I think it’s wonderful faith, and that’s why I believe it’s that we as a family get to make THE IMPORTANCE OF also important to make space for those decisions. We’re certainly FAITH COMMUNITIES faith education in our schools.” very grateful for the SRE that Premier Dominic Perrottet began The Premier also described she takes part in, in her local by referring to his predecessor S R E a s e n r i c h i n g a n d public school.” Gladys Berejiklian, who he encouraging. SRE, or Scripture as it is often said was instrumental in the “Education is one asp ect. known, has had one of its most Government’s strong support of Academics is one aspect, but it difficult years and volunteers Special Religious Education. “Our [SRE] encourages students to were only allowed back into commitment as a Government go beyond the academic basics the classroom after the COVID is to ensure that SRE is stronger of education and ponder bigger restrictions were relaxed on than ever as we move forward,” questions about our place in the November 8. the Premier said. universe and what it means to Archbishop Kanishka Raffel “One of the aspects of the live the good life.” introduced the Premier at the pandemic that became very I n a s how o f bi p a r t is an event, making the point that apparent to me during this support, Labor leader Chris “SRE is proven to deliver key time is the importance of faith Minns praised SRE volunteers psychological benefits in terms communities to the p eople and harked back to the era of a 8

was the Wran Labor government in 1980 that established the principle that learning about religion should be part of the education available to children in NSW government schools,” Mr Minns said. “In fact, I’m a product of SRE instruction at Mortdale Public School in the 1990s. “Of course, NSW today is very different from the 1980s, or indeed the 1990s. It’s more diverse and more multicultural with a wider range of practised faiths.” Apar t from the strong endorsement of the SRE system, the Premier and Education Minister foreshadowed that a digital enrolment process would be deployed in time for 2022, including both the SRE participation letter and a question on religious identity. Archbishop Raffel said faith groups considered it of great importance that parents be empowered with an informed choi ce about the faith education of their children. “The Government’s commitment to digital enrolment in SRE is very welcome and crucial,” he said. “[It] deepens and strengthens the partnership between faith communities, the Government, its scho ols and parents as together we seek to raise confident, resilient children who know they are unconditionally loved by their creator God.” SC SouthernCross