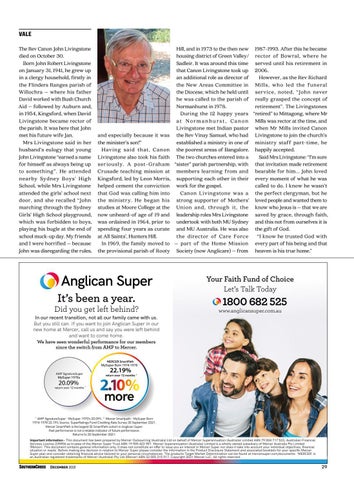 VALE The Rev Canon John Livingstone died on October 30. Born John Robert Livingstone on January 31, 1941, he grew up in a clergy household, firstly in the Flinders Ranges parish of Willochra – where his father David worked with Bush Church Aid – followed by Auburn and, in 1954, Kingsford, when David Livingstone became rector of the parish. It was here that John met his future wife Jan. Mrs Livingstone said in her husband’s eulogy that young John Livingstone “earned a name for himself as always being up to something”. He attended nearby Sydney Boys’ High School, while Mrs Livingstone attended the girls’ school next door, and she recalled “John marching through the Sydney Girls’ High School playground, which was forbidden to boys, playing his bugle at the end of school muck-up day. My friends and I were horrified – because John was disregarding the rules,

and especially because it was the minister’s son!” Having said that, Canon Livingstone also took his faith seriously. A p ost-Graham Crusade teaching mission at Kingsford, led by Leon Morris, helped cement the conviction that God was calling him into the ministry. He began his studies at Moore College at the now unheard-of age of 19 and was ordained in 1964, prior to spending four years as curate at All Saints’, Hunters Hill. In 1969, the family moved to the provisional parish of Rooty

It’s been a year.

Did you get left behind?

In our recent transition, not all our family came with us. But you still can. If you want to join Anglican Super in our new home at Mercer, call us and say you were left behind and want to come home. We have seen wonderful performance for our members since the switch from AMP to Mercer.

Hill, and in 1973 to the then new 1987-1993. After this he became housing district of Green Valley/ rector of Bowral, where he Sadleir. It was around this time served until his retirement in that Canon Livingstone took up 2006. an additional role as director of However, as the Rev Richard the New Areas Committee in Mills, who led the funeral the Diocese, which he held until service, noted, “John never he was called to the parish of really grasped the concept of Normanhurst in 1978. retirement”. The Livingstones During the 12 happy years “retired” to Mittagong, where Mr a t N o r m a n h u r s t , C a n o n Mills was rector at the time, and Livingstone met Indian pastor when Mr Mills invited Canon the Rev Vinay Samuel, who had Livingstone to join the church’s established a ministry in one of ministry staff part-time, he the poorest areas of Bangalore. happily accepted. The two churches entered into a Said Mrs Livingstone: “I’m sure “sister” parish partnership, with that invitation made retirement members learning from and bearable for him... John loved supporting each other in their every moment of what he was work for the gospel. called to do. I know he wasn’t Canon Livingstone was a the perfect clergyman, but he strong supporter of Mothers’ loved people and wanted them to Union and, through it, the know who Jesus is – that we are leadership roles Mrs Livingstone saved by grace, through faith, undertook with both MU Sydney and this not from ourselves it is and MU Australia. He was also the gift of God. the director of Care Force “I know he trusted God with – part of the Home Mission every part of his being and that Society (now Anglicare) – from heaven is his true home.”

Important information - This document has been prepared by Mercer Outsourcing (Australia) Ltd on behalf of Mercer Superannuation (Australia) Limited ABN 79 004 717 533, Australian Financial Services Licence 235906 as trustee of the Mercer Super Trust ABN 19 905 422 981. Mercer Superannuation (Australia) Limited is a wholly owned subsidiary of Mercer Australia Pty Limited (Mercer). This document contains general information only, it does not constitute an offer to issue you an interest in Mercer Super nor does it take into account your individual objectives, financial situation or needs. Before making any decision in relation to Mercer Super please consider the information in the Product Disclosure Statement and associated booklets for your specific Mercer Super plan and consider obtaining financial advice tailored to your personal circumstances. The products Target Market Determination can be found at mercersuper.com/documents. ‘MERCER’ is an Australian registered trademarks of Mercer (Australia) Pty Ltd (Mercer) ABN 32 005 315 917. Copyright 2021 Mercer LLC. All rights reserved.