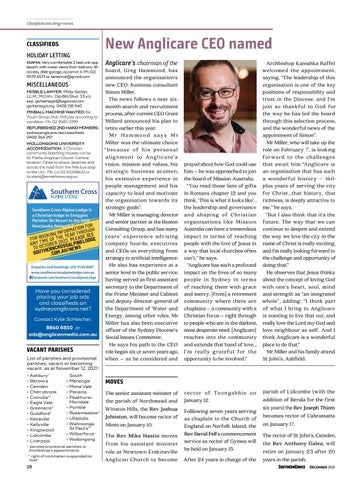 board, Greg Hammond, has announced the organisation’s new CEO: business consultant MISCELLANEOUS MOBILE LAWYER: Philip Gerber, Simon Miller. LL.M., M.Crim., Dip.Bib.Stud. 33 yrs The news follows a near sixexp. gerberlegal@bigpond.com gerberlegal.org 0408 218 940 month search and recruitment PINBALL MACHINE WANTED: for process, after current CEO Grant Youth Group Hub. Will pay according to Millard announced his plan to condition. Ph: 02 9585 2399 REFURBISHED 2ND HAND MOWERS: retire earlier this year. sydneyanglicans.net/classifieds Mr Hammond says Mr 0400 364 297 Miller was the ultimate choice WOLLONGONG UNIVERSITY ACCOMODATION: 3 Christian “ b e c a u s e o f h i s p e rs o n a l community boarding houses run by FOR Church. BOOKING INFORMATION a l i g n m e nt to A n g l i c a re ’ s St Marks Anglican Central ANYbeaches TIME OFand THE YEAR location. Close FOR to shops, vision, mission and values, his across the road from the free stop 2022 THROUGH TO bus OCTOBER strategic business acumen, to the Uni. Ph: Liz 02 42258622 or liz.stark@stmarksww.org.au his extensive experience in people management and his capacity to lead and motivate the organisation towards its A Christian lodge in the heart of strategic goals”. Southern Alpine Lodge A Christian lodge in theproviding heart ofis the SnowyCross Mountains Mr Miller is managing director athe Christian lodge in Smiggins Snowy Mountains providing quality accommodation and Perisher Ski Resort in1963 theand NSW quality accommodation hospitality since and senior partner at the Boston Kosciuszko National hospitality since Park. 1963ON FOR TI Consulting Group, and has many MAOctober GH Rto Snow seasonNJune O F I THROSUEE G R N I A K E Snow season June to October From including years’ exp erience advising BOOperOday SE daily HE Y PL3Emeals Adiscounts R $72 FEarlyTincluding FOLow , 3 meals Season Bird and Eafterday DGE From $72 TIMper ELOdaily 2022Multi-Night N I R company boards, executives P E ANLowY Season L B Bird and A Sdiscounts O Early R SSMulti-Night OCTafter TOAnd WSpring NC OAutumn, E R N Summer, E / H U and CEOs on everything from T A U OM.Autumn, SOAnd .Cper Spring FromSummer, $37 day self-catered strategy to artificial intelligence. From $37 per day self-catered He also has experience at a senior level in the public service, having served as first assistant secretary to the Department of Have you considered the Prime Minister and Cabinet placing your job ads and deputy director-general of and classifieds on the Department of Water and sydneyanglicans.net? Energy, among other roles. Mr Contact Kylie Schleicher: Miller has also been executive 8860 8850 or officer of the Sydney Diocese’s ads@anglicanmedia.com.au Social Issues Committee. He says his path to the CEO VACANT PARISHES role began six or seven years ago, List of parishes and provisional when – as he considered and -

prayed about how God could use him – he was approached to join the board of Mission Australia. “You read those lists of gifts in Romans chapter 12 and you think, ‘This is what it looks like’... the leadership and governance and sh apin g of Christian organisations like Mission Australia can have a tremendous impact in terms of reaching people with the love of Jesus in a way that local churches often can’t,” he says. “Anglicare has such a profound impact on the lives of so many people in Sydney in terms of reaching them with grace and mercy, [from] a retirement community where there are chaplains – a community with a Christian focus – right through to people who are in the darkest, most desperate need. [Anglicare] reaches into the community and extends that hand of love... I’m really grateful for the opportunity to be involved.”

Archbishop Kanishka Raffel welcomed the appointment, saying, “The leadership of this organisation is one of the key positions of responsibility and trust in the Diocese, and I’m just so thankful to God for the way he has led the board through this selection process, and the wonderful news of the appointment of Simon”. Mr Miller, who will take up the role on February 7, is looking forward to the challenges that await him.“Anglicare is an organisation that has such a wonderful history – 160plus years of serving the city for Christ…that history, that richness, is deeply attractive to me,” he says. “But I also think that it’s the future. The way that we can continue to deepen and extend the way we love the city in the name of Christ is really exciting, and I’m really looking forward to the challenge and opportunity of doing that.” He observes that Jesus thinks about the concept of loving God with one’s heart, soul, mind and strength as “an integrated whole”, adding: “I think part of what I bring to Anglicare is wanting to live that out, and really love the Lord my God and love neighbour as self. And I think Anglicare is a wonderful place to do that.” Mr Miller and his family attend St John’s, Ashfield.

MOVES The senior assistant minister of the parish of Northmead and Winston Hills, the Rev Joshua Johnston, will become rector of Minto on January 10. The Rev Mike Hastie moves from his assistant minister role at Newtown Erskineville Anglican Church to become

re c to r o f To o n ga b bi e o n January 12. Folllowing seven years serving as chaplain to the Church of England on Norfolk Island, the Rev David Fell’s commencement service as rector of Gymea will be held on January 15. After 24 years in charge of the

parish of Lidcombe (with the addition of Berala for the first six years) the Rev Joseph Thiem becomes rector of Cabramatta on January 17. The rector of St John’s, Camden, the Rev Anthony Galea, will retire on January 23 after 20 years in the parish. SouthernCross