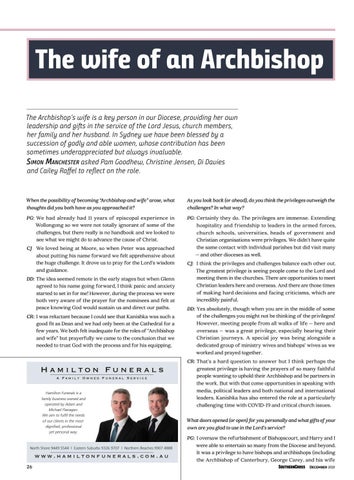 The wife of an Archbishop The Archbishop’s wife is a key person in our Diocese, providing her own leadership and gifts in the service of the Lord Jesus, church members, her family and her husband. In Sydney we have been blessed by a succession of godly and able women, whose contribution has been sometimes underappreciated but always invaluable. Simon Manchester asked Pam Goodhew, Christine Jensen, Di Davies and Cailey Raffel to reflect on the role.

When the possibility of becoming “Archbishop and wife” arose, what thoughts did you both have as you approached it?

As you look back (or ahead), do you think the privileges outweigh the challenges? In what way?

PG: We had already had 11 years of episcopal experience in Wollongong so we were not totally ignorant of some of the challenges, but there really is no handbook and we looked to see what we might do to advance the cause of Christ.

PG: Certainly they do. The privileges are immense. Extending hospitality and friendship to leaders in the armed forces, church schools, universities, heads of government and Christian organisations were privileges. We didn’t have quite the same contact with individual parishes but did visit many – and other dioceses as well.

CJ We loved being at Moore, so when Peter was approached about putting his name forward we felt apprehensive about the huge challenge. It drove us to pray for the Lord’s wisdom and guidance. DD: The idea seemed remote in the early stages but when Glenn agreed to his name going forward, I think panic and anxiety started to set in for me! However, during the process we were both very aware of the prayer for the nominees and felt at peace knowing God would sustain us and direct our paths. CR: I was reluctant because I could see that Kanishka was such a good fit as Dean and we had only been at the Cathedral for a few years. We both felt inadequate for the roles of “Archbishop and wife” but prayerfully we came to the conclusion that we needed to trust God with the process and for his equipping.

CJ: I think the privileges and challenges balance each other out. The greatest privilege is seeing people come to the Lord and meeting them in the churches. There are opportunities to meet Christian leaders here and overseas. And there are those times of making hard decisions and facing criticisms, which are incredibly painful. DD: Yes absolutely, though when you are in the middle of some of the challenges you might not be thinking of the privileges! However, meeting people from all walks of life – here and overseas – was a great privilege, especially hearing their Christian journeys. A special joy was being alongside a dedicated group of ministry wives and bishops’ wives as we worked and prayed together. CR: That’s a hard question to answer but I think perhaps the greatest privilege is having the prayers of so many faithful people wanting to uphold their Archbishop and be partners in the work. But with that come opportunities in speaking with media, political leaders and both national and international leaders. Kanishka has also entered the role at a particularly challenging time with COVID-19 and critical church issues. What doors opened (or open) for you personally and what gifts of your own are you glad to use in the Lord’s service? PG: I oversaw the refurbishment of Bishopscourt, and Harry and I were able to entertain so many from the Diocese and beyond. It was a privilege to have bishops and archbishops (including the Archbishop of Canterbury, George Carey, and his wife SouthernCross