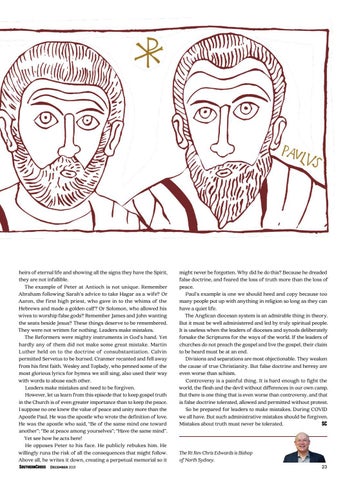 heirs of eternal life and showing all the signs they have the Spirit, they are not infallible. The example of Peter at Antioch is not unique. Remember Abraham following Sarah’s advice to take Hagar as a wife? Or Aaron, the first high priest, who gave in to the whims of the Hebrews and made a golden calf? Or Solomon, who allowed his wives to worship false gods? Remember James and John wanting the seats beside Jesus? These things deserve to be remembered. They were not written for nothing. Leaders make mistakes. The Reformers were mighty instruments in God’s hand. Yet hardly any of them did not make some great mistake. Martin Luther held on to the doctrine of consubstantiation. Calvin permitted Servetus to be burned. Cranmer recanted and fell away from his first faith. Wesley and Toplady, who penned some of the most glorious lyrics for hymns we still sing, also used their way with words to abuse each other. Leaders make mistakes and need to be forgiven. However, let us learn from this episode that to keep gospel truth in the Church is of even greater importance than to keep the peace. I suppose no one knew the value of peace and unity more than the Apostle Paul. He was the apostle who wrote the definition of love. He was the apostle who said, “Be of the same mind one toward another”; “Be at peace among yourselves”; “Have the same mind”. Yet see how he acts here! He opposes Peter to his face. He publicly rebukes him. He willingly runs the risk of all the consequences that might follow. Above all, he writes it down, creating a perpetual memorial so it SouthernCross

might never be forgotten. Why did he do this? Because he dreaded false doctrine, and feared the loss of truth more than the loss of peace. Paul’s example is one we should heed and copy because too many people put up with anything in religion so long as they can have a quiet life. The Anglican diocesan system is an admirable thing in theory. But it must be well administered and led by truly spiritual people. It is useless when the leaders of dioceses and synods deliberately forsake the Scriptures for the ways of the world. If the leaders of churches do not preach the gospel and live the gospel, their claim to be heard must be at an end. Divisions and separations are most objectionable. They weaken the cause of true Christianity. But false doctrine and heresy are even worse than schism. Controversy is a painful thing. It is hard enough to fight the world, the flesh and the devil without differences in our own camp. But there is one thing that is even worse than controversy, and that is false doctrine tolerated, allowed and permitted without protest. So be prepared for leaders to make mistakes. During COVID we all have. But such administrative mistakes should be forgiven. Mistakes about truth must never be tolerated. SC

The Rt Rev Chris Edwards is Bishop of North Sydney. 23