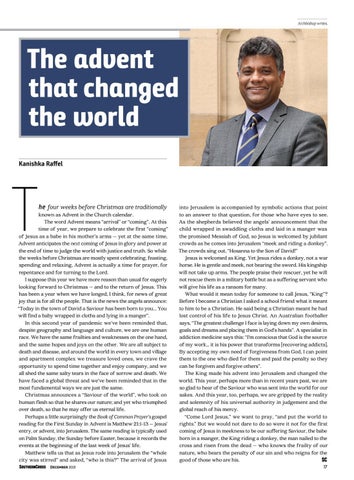 The advent that changed the world Kanishka Raffel

he four weeks before Christmas are traditionally

known as Advent in the Church calendar. The word Advent means “arrival” or “coming”. At this time of year, we prepare to celebrate the first “coming” of Jesus as a babe in his mother’s arms – yet at the same time, Advent anticipates the next coming of Jesus in glory and power at the end of time to judge the world with justice and truth. So while the weeks before Christmas are mostly spent celebrating, feasting, spending and relaxing, Advent is actually a time for prayer, for repentance and for turning to the Lord. I suppose this year we have more reason than usual for eagerly looking forward to Christmas – and to the return of Jesus. This has been a year when we have longed, I think, for news of great joy that is for all the people. That is the news the angels announce: “Today in the town of David a Saviour has been born to you... You will find a baby wrapped in cloths and lying in a manger”. In this second year of pandemic we’ve been reminded that, despite geography and language and culture, we are one human race. We have the same frailties and weaknesses on the one hand, and the same hopes and joys on the other. We are all subject to death and disease, and around the world in every town and village and apartment complex we treasure loved ones, we crave the opportunity to spend time together and enjoy company, and we all shed the same salty tears in the face of sorrow and death. We have faced a global threat and we’ve been reminded that in the most fundamental ways we are just the same. Christmas announces a “Saviour of the world”, who took on human flesh so that he shares our nature; and yet who triumphed over death, so that he may offer us eternal life. Perhaps a little surprisingly the Book of Common Prayer’s gospel reading for the First Sunday in Advent is Matthew 21:1-13 – Jesus’ entry, or advent, into Jerusalem. The same reading is typically used on Palm Sunday, the Sunday before Easter, because it records the events at the beginning of the last week of Jesus’ life. Matthew tells us that as Jesus rode into Jerusalem the “whole city was stirred” and asked, “who is this?” The arrival of Jesus SouthernCross

into Jerusalem is accompanied by symbolic actions that point to an answer to that question, for those who have eyes to see. As the shepherds believed the angels’ announcement that the child wrapped in swaddling cloths and laid in a manger was the promised Messiah of God, so Jesus is welcomed by jubilant crowds as he comes into Jerusalem “meek and riding a donkey”. The crowds sing out, “Hosanna to the Son of David!” Jesus is welcomed as King. Yet Jesus rides a donkey, not a war horse. He is gentle and meek, not bearing the sword. His kingship will not take up arms. The people praise their rescuer, yet he will not rescue them in a military battle but as a suffering servant who will give his life as a ransom for many. What would it mean today for someone to call Jesus, “King”? Before I became a Christian I asked a school friend what it meant to him to be a Christian. He said being a Christian meant he had lost control of his life to Jesus Christ. An Australian footballer says, “The greatest challenge I face is laying down my own desires, goals and dreams and placing them in God’s hands”. A specialist in addiction medicine says this: “I’m conscious that God is the source of my work… it is his power that transforms [recovering addicts]. By accepting my own need of forgiveness from God, I can point them to the one who died for them and paid the penalty so they can be forgiven and forgive others”. The King made his advent into Jerusalem and changed the world. This year, perhaps more than in recent years past, we are so glad to hear of the Saviour who was sent into the world for our sakes. And this year, too, perhaps, we are gripped by the reality and solemnity of his universal authority in judgement and the global reach of his mercy. “Come Lord Jesus,” we want to pray, “and put the world to rights.” But we would not dare to do so were it not for the first coming of Jesus in meekness to be our suffering Saviour, the babe born in a manger, the King riding a donkey, the man nailed to the cross and risen from the dead – who knows the frailty of our nature, who bears the penalty of our sin and who reigns for the good of those who are his. SC 17