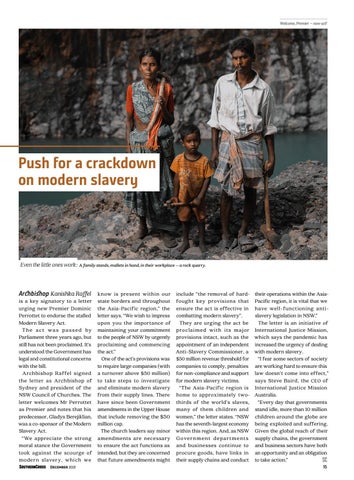 Push for a crackdown on modern slavery

Even the little ones work: A family stands, mallets in hand, in their workplace – a rock quarry.

Archbishop Kanishka Raffel know is present within our include “the removal of hard- their operations within the Asiais a key signatory to a letter urging new Premier Dominic Perrottet to endorse the stalled Modern Slavery Act. The act was passed by Parliament three years ago, but still has not been proclaimed. It’s understood the Government has legal and constitutional concerns with the bill. Archbishop Raffel signed the letter as Archbishop of Sydney and president of the NSW Council of Churches. The letter welcomes Mr Perrottet as Premier and notes that his predecessor, Gladys Berejiklian, was a co-sponsor of the Modern Slavery Act. “We appreciate the strong moral stance the Government took against the scourge of modern slavery, which we SouthernCross

state borders and throughout the Asia-Pacific region,” the letter says. “We wish to impress upon you the importance of maintaining your commitment to the people of NSW by urgently proclaiming and commencing the act.” One of the act’s provisions was to require large companies (with a turnover above $50 million) to take steps to investigate and eliminate modern slavery from their supply lines. There have since been Government amendments in the Upper House that include removing the $50 million cap. The church leaders say minor amendments are necessary to ensure the act functions as intended, but they are concerned that future amendments might

fought key provisions that ensure the act is effective in combatting modern slavery”. They are urging the act be pro claimed with its major provisions intact, such as the appointment of an independent Anti-Slavery Commissioner, a $50 million revenue threshold for companies to comply, penalties for non-compliance and support for modern slavery victims. “The Asia-Pacific region is home to approximately twothirds of the world’s slaves, many of them children and women,” the letter states. “NSW has the seventh-largest economy within this region. And, as NSW G o ve r n me nt dep a r t me nt s and businesses continue to procure goods, have links in their supply chains and conduct

Pacific region, it is vital that we have well-functioning antislavery legislation in NSW.” The letter is an initiative of International Justice Mission, which says the pandemic has increased the urgency of dealing with modern slavery. “I fear some sectors of society are working hard to ensure this law doesn’t come into effect,” says Steve Baird, the CEO of International Justice Mission Australia. “Every day that governments stand idle, more than 10 million children around the globe are being exploited and suffering. Given the global reach of their supply chains, the government and business sectors have both an opportunity and an obligation to take action.” SC 15