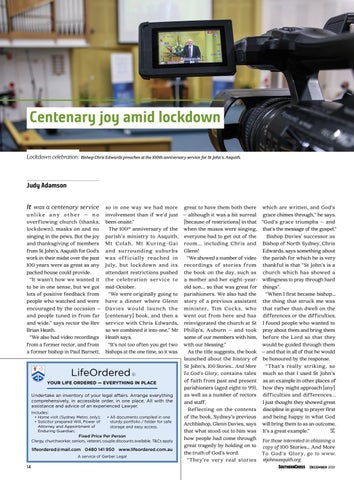 Judy Adamson It was a centenary service so in one way we had more great to have them both there which are written, and God’s unlike any other – no overflowing church (thanks, lockdown), masks on and no singing in the pews. But the joy and thanksgiving of members from St John’s, Asquith for God’s work in their midst over the past 100 years were as great as any packed house could provide. “It wasn’t how we wanted it to be in one sense, but we got lots of positive feedback from people who watched and were encouraged by the occasion – and people tuned in from far and wide,” says rector the Rev Brian Heath. “We also had video recordings from a former rector, and from a former bishop in Paul Barnett,

involvement than if we’d just been onsite.” The 100th anniversary of the parish’s ministry to Asquith, M t C ol a h , M t K u r i n g - G a i and su rroundin g subu rbs wa s o ff i c i all y re a che d i n July, but lockdown and its attendant restrictions pushed the celebration servi ce to mid-October. “We were originally going to have a dinner where Glenn D av i e s wo u l d l au nch t he [centenary] book, and then a service with Chris Edwards, so we combined it into one,” Mr Heath says. “It’s not too often you get two bishops at the one time, so it was

LifeOrdered © YOUR LIFE ORDERED — EVERYTHING IN PLACE Undertake an inventory of your legal affairs. Arrange everything comprehensively, in accessible order, in one place. All with the assistance and advice of an experienced Lawyer. Includes: • Home visit (Sydney Metro. only); • Solicitor prepared Will, Power of Attorney and Appointment of Enduring Guardian;

• All documents compiled in one sturdy portfolio / folder for safe storage and easy access.

– although it was a bit surreal [because of restrictions] in that when the musos were singing, everyone had to get out of the room... including Chris and Glenn! “We showed a number of video recordings of stories from the book on the day, such as a mother and her eight-yearold son... so that was great for parishioners. We also had the story of a previous assistant minister, Tim Co cks, who went out from here and has reinvigorated the church at St Philip’s, Auburn – and took some of our members with him, with our blessing.” As the title suggests, the book launched about the history of St John’s, 100 Stories… And More To God’s Glory, contains tales of faith from past and present parishioners (aged eight to 99), as well as a number of rectors and staff. Reflecting on the contents of the book, Sydney’s previous Archbishop, Glenn Davies, says that what stood out to him was how people had come through great tragedy by holding on to the truth of God’s word. “They’re very real stories

grace chimes through,” he says. “God’s grace triumphs – and that’s the message of the gospel.” Bishop Davies’ successor as Bishop of North Sydney, Chris Edwards, says something about the parish for which he is very thankful is that “St John’s is a church which has showed a willingness to pray through hard things”. “When I first became bishop... the thing that struck me was that rather than dwell on the differences or the difficulties, I found people who wanted to pray about them and bring them before the Lord so that they would be guided through them – and that in all of that he would be honoured by the response. “That’s really striking, so much so that I used St John’s as an example in other places of how they might approach [any] difficulties and differences... I just thought they showed great discipline in going to prayer first and being happy in what God will bring them to as an outcome. It’s a great example.” SC For those interested in obtaining a copy of 100 Stories… And More To Go d’s Glory, go to www. stjohnsasquith.org SouthernCross