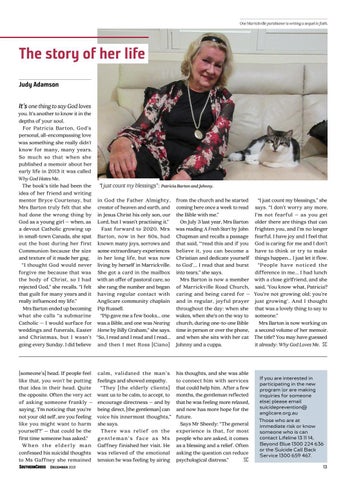 One Marrickville parishioner is writing a sequel in faith.

The story of her life Judy Adamson It’s one thing to say God loves you. It’s another to know it in the depths of your soul. For Patricia Barton, God’s personal, all-encompassing love was something she really didn’t know for many, many years. So much so that when she published a memoir about her early life in 2013 it was called Why God Hates Me. The book’s title had been the idea of her friend and writing mentor Bryce Courtenay, but Mrs Barton truly felt that she had done the wrong thing by God as a young girl – when, as a devout Catholic growing up in small-town Canada, she spat out the host during her first Communion because the size and texture of it made her gag. “I thought God would never forgive me because that was the body of Christ, so I had rejected God,” she recalls. “I felt that guilt for many years and it really influenced my life.” Mrs Barton ended up becoming what she calls “a submarine Catholic – I would surface for weddings and funerals, Easter and Christmas, but I wasn’t going every Sunday. I did believe

in God the Father Almighty, creator of heaven and earth, and in Jesus Christ his only son, our Lord, but I wasn’t practising it.” Fast forward to 2020. Mrs Barton, now in her 80s, had known many joys, sorrows and some extraordinary experiences in her long life, but was now living by herself in Marrickville. She got a card in the mailbox with an offer of pastoral care, so she rang the number and began having regular contact with Anglicare community chaplain Pip Russell. “Pip gave me a few books... one was a Bible, and one was Nearing Home by Billy Graham,” she says. “So, I read and I read and I read... and then I met Ross [Ciano]

from the church and he started coming here once a week to read the Bible with me.” On July 3 last year, Mrs Barton was reading A Fresh Start by John Chapman and recalls a passage that said, “‘read this and if you believe it, you can become a Christian and dedicate yourself to God’... I read that and burst into tears,” she says. Mrs Barton is now a member of Marrickville Road Church, caring and being cared for – and in regular, joyful prayer throughout the day: when she wakes, when she’s on the way to church, during one-to-one Bible time in person or over the phone, and when she sits with her cat Johnny and a cuppa.

[someone’s] head. If people feel like that, you won’t be putting that idea in their head. Quite the opposite. Often the very act of asking someone frankly – saying, ‘I’m noticing that you’re not your old self, are you feeling like you might want to harm yourself?’ – that could be the first time someone has asked.” W hen the elderly man confessed his suicidal thoughts to Ms Gaffney she remained

calm, validated the man’s feelings and showed empathy. “They [the elderly clients] want us to be calm, to accept, to encourage directness – and by being direct, [the gentleman] can voice his innermost thoughts,” she says. T he re wa s re li e f o n t he gentleman’s face a s Ms Gaffney finished her visit. He was relieved of the emotional tension he was feeling by airing

his thoughts, and she was able to connect him with services that could help him. After a few months, the gentleman reflected that he was feeling more relaxed, and now has more hope for the future. Says Mr Sheedy: “The general experience is that, for most people who are asked, it comes as a blessing and a relief. Often asking the question can reduce psychological distress.” SC

“I just count my blessings”: Patricia Barton and Johnny. “I just count my blessings,” she says. “I don’t worry any more. I’m not fearful – as you get older there are things that can frighten you, and I’m no longer fearful. I have joy and I feel that God is caring for me and I don’t have to think or try to make things happen... I just let it flow. “People have noticed the difference in me... I had lunch with a close girlfriend, and she said, ‘You know what, Patricia? You’re not growing old; you’re just growing’. And I thought that was a lovely thing to say to someone.” Mrs Barton is now working on a second volume of her memoir. The title? You may have guessed it already: Why God Loves Me. SC

If you are interested in participating in the new program (or are making inquiries for someone else) please email suicideprevention@ anglicare.org.au Those who are at immediate risk or know someone who is can contact Lifeline 13 11 14, Beyond Blue 1300 224 636 or the Suicide Call Back Service 1300 659 467. 13