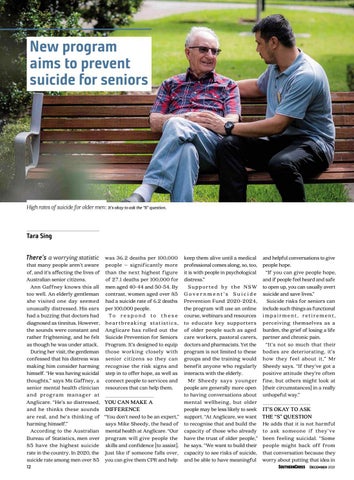 Tara Sing There’s a worrying statistic was 36.2 deaths per 100,000 keep them alive until a medical and helpful conversations to give that many people aren’t aware of, and it’s affecting the lives of Australian senior citizens. Ann Gaffney knows this all too well. An elderly gentleman she visited one day seemed unusually distressed. His ears had a buzzing that doctors had diagnosed as tinnitus. However, the sounds were constant and rather frightening, and he felt as though he was under attack. During her visit, the gentleman confessed that his distress was making him consider harming himself. “He was having suicidal thoughts,” says Ms Gaffney, a senior mental health clinician a n d p ro g ra m m a n a ge r at Anglicare. “He’s so distressed, and he thinks these sounds are real, and he’s thinking of harming himself.” According to the Australian Bureau of Statistics, men over 85 have the highest suicide rate in the country. In 2020, the suicide rate among men over 85 12

people – significantly more than the next highest figure of 27.1 deaths per 100,000 for men aged 40-44 and 50-54. By contrast, women aged over 85 had a suicide rate of 6.2 deaths per 100,000 people. To respond to these h e a r t b re a k i n g s t a t i s t i c s , Anglicare has rolled out the Suicide Prevention for Seniors Program. It’s designed to equip those working closely with senior citizens so they can recognise the risk signs and step in to offer hope, as well as connect people to services and resources that can help them.

professional comes along, so, too, it is with people in psychological distress.” Supp orted by the NSW Government’s Suicide Prevention Fund 2020-2024, the program will use an online course, webinars and resources to educate key supporters of older people such as aged care workers, pastoral carers, doctors and pharmacists. Yet the program is not limited to these groups and the training would benefit anyone who regularly interacts with the elderly. Mr Sheedy says younger people are generally more open to having conversations about YOU CAN MAKE A mental wellbeing, but older DIFFERENCE people may be less likely to seek “You don’t need to be an expert,” support. “At Anglicare, we want says Mike Sheedy, the head of to recognise that and build the mental health at Anglicare. “Our capacity of those who already program will give people the have the trust of older people,” skills and confidence [to assist]. he says. “We want to build their Just like if someone falls over, capacity to see risks of suicide, you can give them CPR and help and be able to have meaningful

people hope. “If you can give people hope, and if people feel heard and safe to open up, you can usually avert suicide and save lives.” Suicide risks for seniors can include such things as functional impairment, retirement, perceiving themselves as a burden, the grief of losing a life partner and chronic pain. “It’s not so much that their bodies are deteriorating, it’s how they feel about it,” Mr Sheedy says. “If they’ve got a positive attitude they’re often fine, but others might look at [their circumstances] in a really unhopeful way.”

IT’S OKAY TO ASK THE “S” QUESTION He adds that it is not harmful to ask someone if they’ve been feeling suicidal. “Some people might back off from that conversation because they worry about putting that idea in SouthernCross