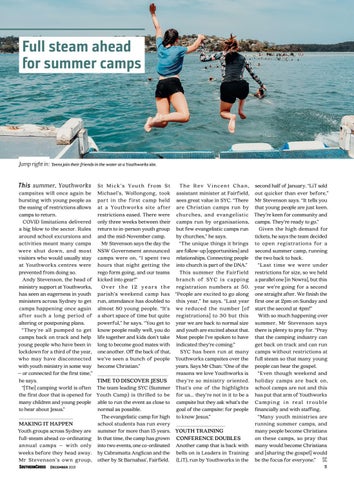 Full steam ahead for summer camps

Jump right in: Teens join their friends in the water at a Youthworks site.

This summer, Youthworks S t M i c k ’ s Yo u t h f ro m S t campsites will once again be bursting with young people as the easing of restrictions allows camps to return. COVID limitations delivered a big blow to the sector. Rules around school excursions and activities meant many camps were shut down, and most visitors who would usually stay at Youthworks centres were prevented from doing so. Andy Stevenson, the head of ministry support at Youthworks, has seen an eagerness in youth ministers across Sydney to get camps happening once again after such a long period of altering or postponing plans. “They’re all pumped to get camps back on track and help young people who have been in lockdown for a third of the year, who may have disconnected with youth ministry in some way – or connected for the first time,” he says. “[The] camping world is often the first door that is opened for many children and young people to hear about Jesus.”

MAKING IT HAPPEN Youth groups across Sydney are full-steam ahead co-ordinating annual camps – with only weeks before they head away. Mr Stevenson’s own group, SouthernCross

Michael’s, Wollongong, took part in the first camp held at a Youthworks site after restrictions eased. There were only three weeks between their return to in-person youth group and the mid-November camp. Mr Stevenson says the day the NSW Government announced camps were on, “I spent two hours that night getting the rego form going, and our teams kicked into gear!” Over the 12 years the parish’s weekend camp has run, attendance has doubled to almost 80 young people. “It’s a short space of time but quite powerful,” he says. “You get to know people really well, you do life together and kids don’t take long to become good mates with one another. Off the back of that, we’ve seen a bunch of people become Christian.”

TIME TO DISCOVER JESUS The team leading SYC (Summer Youth Camp) is thrilled to be able to run the event as close to normal as possible. The evangelistic camp for high school students has run every summer for more than 15 years. In that time, the camp has grown into two events, one co-ordinated by Cabramatta Anglican and the other by St Barnabas’, Fairfield.

The Rev Vincent Chan, assistant minister at Fairfield, sees great value in SYC. “There are Christian camps run by churches, and evangelistic camps run by organisations, but few evangelistic camps run by churches,” he says. “The unique things it brings are follow-up [opportunities] and relationships. Connecting people into church is part of the DNA.” This summer the Fairfield branch of SYC is capping registration numbers at 50. “People are excited to go along this year,” he says. “Last year we reduced the number [of registrations] to 30 but this year we are back to normal size and youth are excited about that. Most people I’ve spoken to have indicated they’re coming.” SYC has been run at many Youthworks campsites over the years. Says Mr Chan: “One of the reasons we love Youthworks is they’re so ministry oriented. That’s one of the highlights for us... they’re not in it to be a campsite but they ask what’s the goal of the campsite: for people to know Jesus.”

second half of January. “LiT sold out quicker than ever before,” Mr Stevenson says. “It tells you that young people are just keen. They’re keen for community and camps. They’re ready to go.” Given the high demand for tickets, he says the team decided to open registrations for a second summer camp, running the two back to back. “Last time we were under restrictions for size, so we held a parallel one [in Nowra], but this year we’re going for a second one straight after. We finish the first one at 2pm on Sunday and start the second at 4pm!” With so much happening over summer, Mr Stevenson says there is plenty to pray for. “Pray that the camping industry can get back on track and can run camps without restrictions at full steam so that many young people can hear the gospel. “Even though weekend and holiday camps are back on, school camps are not and this has put that arm of Youthworks C a m p i n g i n re a l t ro u b l e financially and with staffing. “Many youth ministries are running summer camps, and YOUTH TRAINING many people become Christians CONFERENCE DOUBLES on these camps, so pray that Another camp that is back with many would become Christians bells on is Leaders in Training and [sharing the gospel] would (LiT), run by Youthworks in the be the focus for everyone.” SC 11