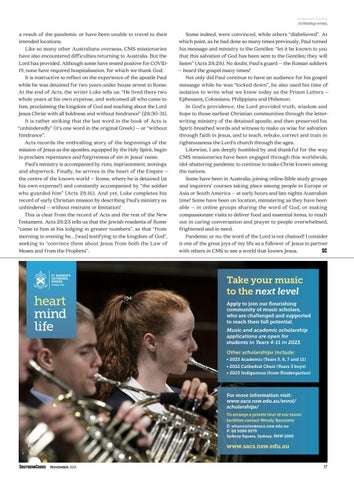 a result of the pandemic or have been unable to travel to their intended locations. Like so many other Australians overseas, CMS missionaries have also encountered difficulties returning to Australia. But the Lord has provided. Although some have tested positive for COVID19, none have required hospitalisation, for which we thank God. It is instructive to reflect on the experience of the apostle Paul while he was detained for two years under house arrest in Rome. At the end of Acts, the writer Luke tells us: “He lived there two whole years at his own expense, and welcomed all who came to him, proclaiming the kingdom of God and teaching about the Lord Jesus Christ with all boldness and without hindrance” (28:30-31). It is rather striking that the last word in the book of Acts is “unhinderedly” (it’s one word in the original Greek) – or “without hindrance”. Acts records the enthralling story of the beginnings of the mission of Jesus as the apostles, equipped by the Holy Spirit, begin to proclaim repentance and forgiveness of sin in Jesus’ name. Paul’s ministry is accompanied by riots, imprisonment, stonings and shipwreck. Finally, he arrives in the heart of the Empire – the centre of the known world – Rome, where he is detained (at his own expense!) and constantly accompanied by “the soldier who guarded him” (Acts 28:16). And yet, Luke completes his record of early Christian mission by describing Paul’s ministry as unhindered – without restraint or limitation! This is clear from the record of Acts and the rest of the New Testament. Acts 28:23 tells us that the Jewish residents of Rome “came to him at his lodging in greater numbers”, so that “from morning to evening he... [was] testifying to the kingdom of God”, seeking to “convince them about Jesus from both the Law of Moses and from the Prophets”.

Some indeed, were convinced, while others “disbelieved”. At which point, as he had done so many times previously, Paul turned his message and ministry to the Gentiles: “let it be known to you that this salvation of God has been sent to the Gentiles; they will listen” (Acts 28:28). No doubt, Paul’s guard – the Roman soldiers – heard the gospel many times! Not only did Paul continue to have an audience for his gospel message while he was “locked down”, he also used his time of isolation to write what we know today as the Prison Letters – Ephesians, Colossians, Philippians and Philemon. In God’s providence, the Lord provided truth, wisdom and hope to those earliest Christian communities through the letterwriting ministry of the detained apostle, and then preserved his Spirit-breathed words and witness to make us wise for salvation through faith in Jesus, and to teach, rebuke, correct and train in righteousness the Lord’s church through the ages. Likewise, I am deeply humbled by and thankful for the way CMS missionaries have been engaged through this worldwide, idol-shattering pandemic to continue to make Christ known among the nations. Some have been in Australia, joining online Bible study groups and inquirers’ courses taking place among people in Europe or Asia or South America – at early hours and late nights Australian time! Some have been on location, ministering as they have been able – in online groups sharing the word of God, or making compassionate visits to deliver food and essential items, to reach out in caring conversation and prayer to people overwhelmed, frightened and in need. Pandemic or no, the word of the Lord is not chained! I consider it one of the great joys of my life as a follower of Jesus to partner with others in CMS to see a world that knows Jesus. SC

Take your music to the next level Apply to join our flourishing community of music scholars, who are challenged and supported to reach their full potential. Music and academic scholarship applications are open for students in Years 4-11 in 2023. Other scholarships include: • 2023 Academic (Years 5, 6, 7 and 11) • 2022 Cathedral Choir (Years 3 boys) • 2023 Indigenous (from Kindergarten) 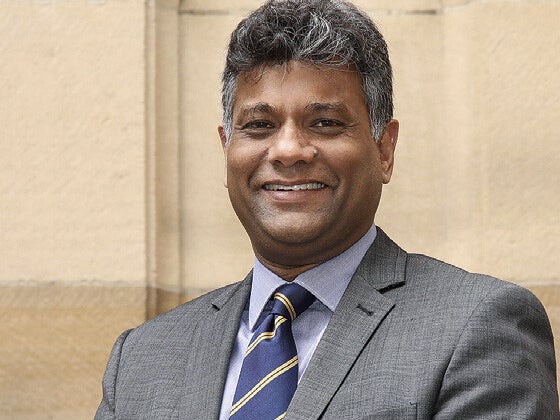