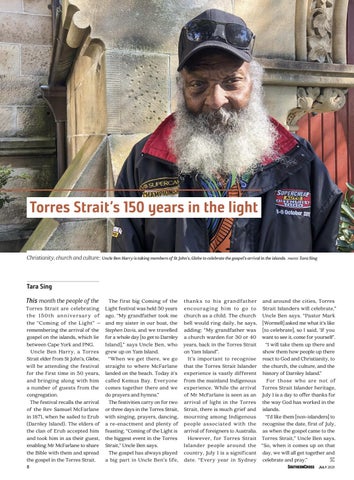 Tara Sing This month the people of the Torres Strait are celebrating t he 15 0 t h a n n i ve rs a r y o f the “Coming of the Light” – remembering the arrival of the gospel on the islands, which lie between Cape York and PNG. Uncle Ben Harry, a Torres Strait elder from St John’s, Glebe, will be attending the festival for the first time in 50 years, and bringing along with him a number of guests from the congregation. The festival recalls the arrival of the Rev Samuel McFarlane in 1871, when he sailed to Erub (Darnley Island). The elders of the clan of Erub accepted him and took him in as their guest, enabling Mr McFarlane to share the Bible with them and spread the gospel in the Torres Strait. 8

The first big Coming of the Light festival was held 50 years ago. “My grandfather took me and my sister in our boat, the Stephen Davis, and we travelled for a whole day [to get to Darnley Island],” says Uncle Ben, who grew up on Yam Island. “When we get there, we go straight to where McFarlane landed on the beach. Today it’s called Kemus Bay. Everyone comes together there and we do prayers and hymns.” The festivities carry on for two or three days in the Torres Strait, with singing, prayers, dancing, a re-enactment and plenty of feasting. “Coming of the Light is the biggest event in the Torres Strait,” Uncle Ben says. The gospel has always played a big part in Uncle Ben’s life,

and around the cities, Torres Strait Islanders will celebrate,” Uncle Ben says. “Pastor Mark [Wormell] asked me what it’s like [to celebrate], so I said, ‘If you want to see it, come for yourself’. “I will take them up there and show them how people up there react to God and Christianity, to the church, the culture, and the history of Darnley Island.” For those who are not of Torres Strait Islander heritage, July 1 is a day to offer thanks for the way God has worked in the islands. “I’d like them [non-islanders] to recognise the date, first of July, as when the gospel came to the Torres Strait,” Uncle Ben says. “So, when it comes up on that day, we will all get together and celebrate and pray.” SC SouthernCross