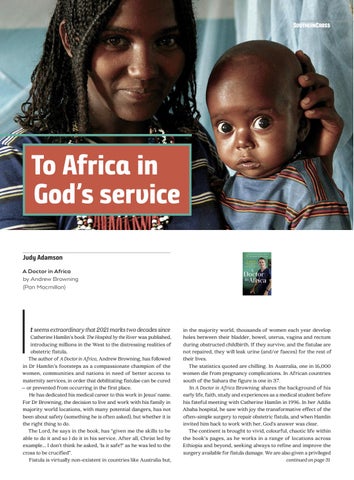 Catherine Hamlin’s book The Hospital by the River was published, introducing millions in the West to the distressing realities of obstetric fistula. The author of A Doctor in Africa, Andrew Browning, has followed in Dr Hamlin’s footsteps as a compassionate champion of the women, communities and nations in need of better access to maternity services, in order that debilitating fistulae can be cured – or prevented from occurring in the first place. He has dedicated his medical career to this work in Jesus’ name. For Dr Browning, the decision to live and work with his family in majority world locations, with many potential dangers, has not been about safety (something he is often asked), but whether it is the right thing to do. The Lord, he says in the book, has “given me the skills to be able to do it and so I do it in his service. After all, Christ led by example... I don’t think he asked, ‘Is it safe?’ as he was led to the cross to be crucified”. Fistula is virtually non-existent in countries like Australia but,

in the majority world, thousands of women each year develop holes between their bladder, bowel, uterus, vagina and rectum during obstructed childbirth. If they survive, and the fistulae are not repaired, they will leak urine (and/or faeces) for the rest of their lives. The statistics quoted are chilling. In Australia, one in 16,000 women die from pregnancy complications. In African countries south of the Sahara the figure is one in 37. In A Doctor in Africa Browning shares the background of his early life, faith, study and experiences as a medical student before his fateful meeting with Catherine Hamlin in 1996. In her Addis Ababa hospital, he saw with joy the transformative effect of the often-simple surgery to repair obstetric fistula, and when Hamlin invited him back to work with her, God’s answer was clear. The continent is brought to vivid, colourful, chaotic life within the book’s pages, as he works in a range of locations across Ethiopia and beyond, seeking always to refine and improve the surgery available for fistula damage. We are also given a privileged continued on page 31