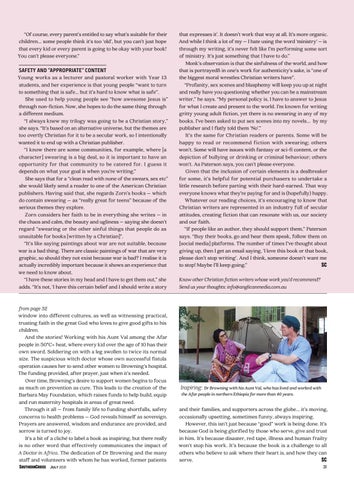 “Of course, every parent’s entitled to say what’s suitable for their children... some people think it’s too ‘old’, but you can’t just hope that every kid or every parent is going to be okay with your book! You can’t please everyone.” SAFETY AND “APPROPRIATE” CONTENT Young works as a lecturer and pastoral worker with Year 13 students, and her experience is that young people “want to turn to something that is safe... but it’s hard to know what is safe”. She used to help young people see “how awesome Jesus is” through non-fiction. Now, she hopes to do the same thing through a different medium. “I always knew my trilogy was going to be a Christian story,” she says. “It’s based on an alternative universe, but the themes are too overtly Christian for it to be a secular work, so I intentionally wanted it to end up with a Christian publisher. “I know there are some communities, for example, where [a character] swearing is a big deal, so it is important to have an opportunity for that community to be catered for. I guess it depends on what your goal is when you’re writing.” She says that for a “clean read with none of the swears, sex etc” she would likely send a reader to one of the American Christian publishers. Having said that, she regards Zorn’s books – which do contain swearing – as “really great for teens” because of the serious themes they explore. Zorn considers her faith to be in everything she writes – in the chaos and calm, the beauty and ugliness – saying she doesn’t regard “swearing or the other sinful things that people do as unsuitable for books [written by a Christian]”. “It’s like saying paintings about war are not suitable, because war is a bad thing. There are classic paintings of war that are very graphic, so should they not exist because war is bad? I realise it is actually incredibly important because it shows an experience that we need to know about. “I have these stories in my head and I have to get them out,” she adds. “It’s not, ‘I have this certain belief and I should write a story

from page 32 window into different cultures, as well as witnessing practical, trusting faith in the great God who loves to give good gifts to his children. And the stories! Working with his Aunt Val among the Afar people in 50°C+ heat, where every kid over the age of 10 has their own sword. Soldiering on with a leg swollen to twice its normal size. The suspicious witch doctor whose own successful fistula operation causes her to send other women to Browning’s hospital. The funding provided, after prayer, just when it’s needed. Over time, Browning’s desire to support women begins to focus as much on prevention as cure. This leads to the creation of the Barbara May Foundation, which raises funds to help build, equip and run maternity hospitals in areas of great need. Through it all – from family life to funding shortfalls, safety concerns to health problems – God reveals himself as sovereign. Prayers are answered, wisdom and endurance are provided, and sorrow is turned to joy. It’s a bit of a cliché to label a book as inspiring, but there really is no other word that effectively communicates the impact of A Doctor in Africa. The dedication of Dr Browning and the many staff and volunteers with whom he has worked, former patients SouthernCross

that expresses it’. It doesn’t work that way at all. It’s more organic. And while I think a lot of my – I hate using the word ‘ministry’ – is through my writing, it’s never felt like I’m performing some sort of ministry. It’s just something that I have to do.” Monk’s observation is that the sinfulness of the world, and how that is portrayedß in one’s work for authenticity’s sake, is “one of the biggest moral wrestles Christian writers have”. “Profanity, sex scenes and blasphemy will keep you up at night and really have you questioning whether you can be a mainstream writer,” he says. “My personal policy is, I have to answer to Jesus for what I create and present to the world. I’m known for writing gritty young adult fiction, yet there is no swearing in any of my books. I’ve been asked to put sex scenes into my novels... by my publisher and I flatly told them ‘No’.” It’s the same for Christian readers or parents. Some will be happy to read or recommend fiction with swearing; others won’t. Some will have issues with fantasy or sci-fi content, or the depiction of bullying or drinking or criminal behaviour; others won’t. As Paterson says, you can’t please everyone. Given that the inclusion of certain elements is a dealbreaker for some, it’s helpful for potential purchasers to undertake a little research before parting with their hard-earned. That way everyone knows what they’re paying for and is (hopefully) happy. Whatever our reading choices, it’s encouraging to know that Christian writers are represented in an industry full of secular attitudes, creating fiction that can resonate with us, our society and our faith. “If people like an author, they should support them,” Paterson says. “Buy their books, go and hear them speak, follow them on [social media] platforms. The number of times I’ve thought about giving up, then I get an email saying, ‘I love this book or that book, please don’t stop writing’. And I think, someone doesn’t want me to stop! Maybe I’ll keep going.”SC Know other Christian fiction writers whose work you’d recommend? Send us your thoughts: info@anglicanmedia.com.au

Inspiring: Dr Browning with his Aunt Val, who has lived and worked with the Afar people in northern Ethiopia for more than 40 years.

and their families, and supporters across the globe... it’s moving, occasionally upsetting, sometimes funny, always inspiring. However, this isn’t just because “good” work is being done. It’s because God is being glorified by those who serve, give and trust in him. It’s because disaster, red tape, illness and human frailty won’t stop his work. It’s because the book is a challenge to all others who believe to ask where their heart is, and how they can serve.SC 31