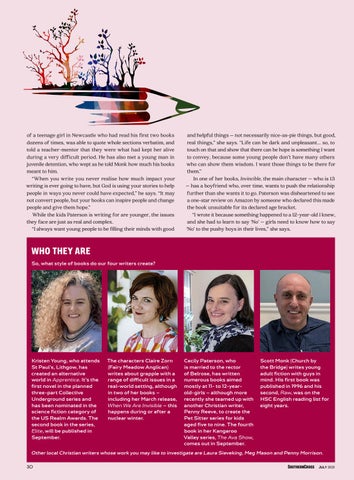 of a teenage girl in Newcastle who had read his first two books dozens of times, was able to quote whole sections verbatim, and told a teacher-mentor that they were what had kept her alive during a very difficult period. He has also met a young man in juvenile detention, who wept as he told Monk how much his books meant to him. “When you write you never realise how much impact your writing is ever going to have, but God is using your stories to help people in ways you never could have expected,” he says. “It may not convert people, but your books can inspire people and change people and give them hope.” While the kids Paterson is writing for are younger, the issues they face are just as real and complex. “I always want young people to be filling their minds with good

and helpful things – not necessarily nice-as-pie things, but good, real things,” she says. “Life can be dark and unpleasant... so, to touch on that and show that there can be hope is something I want to convey, because some young people don’t have many others who can show them wisdom. I want those things to be there for them.” In one of her books, Invincible, the main character – who is 13 – has a boyfriend who, over time, wants to push the relationship further than she wants it to go. Paterson was disheartened to see a one-star review on Amazon by someone who declared this made the book unsuitable for its declared age bracket. “I wrote it because something happened to a 12-year-old I knew, and she had to learn to say ‘No’ – girls need to know how to say ‘No’ to the pushy boys in their lives,” she says.

WHO THEY ARE So, what style of books do our four writers create?

Kristen Young, who attends St Paul’s, Lithgow, has created an alternative world in Apprentice. It’s the first novel in the planned three-part Collective Underground series and has been nominated in the science fiction category of the US Realm Awards. The second book in the series, Elite, will be published in September.

The characters Claire Zorn (Fairy Meadow Anglican) writes about grapple with a range of difficult issues in a real-world setting, although in two of her books – including her March release, When We Are Invisible – this happens during or after a nuclear winter.

Cecily Paterson, who is married to the rector of Belrose, has written numerous books aimed mostly at 11- to 12-yearold-girls – although more recently she teamed up with another Christian writer, Penny Reeve, to create the Pet Sitter series for kids aged five to nine. The fourth book in her Kangaroo Valley series, The Ava Show, comes out in September.

Scott Monk (Church by the Bridge) writes young adult fiction with guys in mind. His first book was published in 1996 and his second, Raw, was on the HSC English reading list for eight years.

Other local Christian writers whose work you may like to investigate are Laura Sieveking, Meg Mason and Penny Morrison. 30