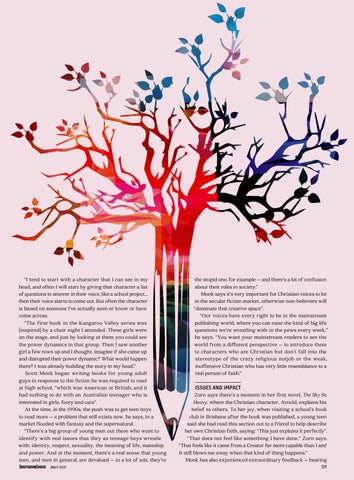 “I tend to start with a character that I can see in my head, and often I will start by giving that character a list of questions to answer in their voice, like a school project... then their voice starts to come out. But often the character is based on someone I’ve actually seen or know or have come across. “The first book in the Kangaroo Valley series was [inspired] by a choir night I attended. Three girls were on the stage, and just by looking at them you could see the power dynamics in that group. Then I saw another girl a few rows up and I thought, imagine if she came up and disrupted their power dynamic? What would happen there? I was already building the story in my head.” Scott Monk began writing books for young adult guys in response to the fiction he was required to read at high school, “which was American or British, and it had nothing to do with an Australian teenager who is interested in girls, footy and cars”. At the time, in the 1990s, the push was to get teen boys to read more – a problem that still exists now, he says, in a market flooded with fantasy and the supernatural. “There’s a big group of young men out there who want to identify with real issues that they as teenage boys wrestle with: identity, respect, sexuality, the meaning of life, mateship and power. And at the moment, there’s a real sense that young men, and men in general, are devalued – in a lot of ads, they’re SouthernCross

the stupid one, for example – and there’s a lot of confusion about their roles in society.” Monk says it’s very important for Christian voices to be in the secular fiction market, otherwise non-believers will “dominate that creative space”. “Our voices have every right to be in the mainstream publishing world, where you can raise the kind of big life questions we’re wrestling with in the pews every week,” he says. “You want your mainstream readers to see the world from a different perspective – to introduce them to characters who are Christian but don’t fall into the stereotype of the crazy religious nutjob or the weak, inoffensive Christian who has very little resemblance to a real person of faith.” ISSUES AND IMPACT Zorn says there’s a moment in her first novel, The Sky So Heavy, where the Christian character, Arnold, explains his belief to others. To her joy, when visiting a school’s book club in Brisbane after the book was published, a young teen said she had read this section out to a friend to help describe her own Christian faith, saying: “This just explains it perfectly”. “That does not feel like something I have done,” Zorn says. “That feels like it came from a Creator far more capable than I am! It still blows me away when that kind of thing happens.” Monk has also experienced extraordinary feedback – hearing 29