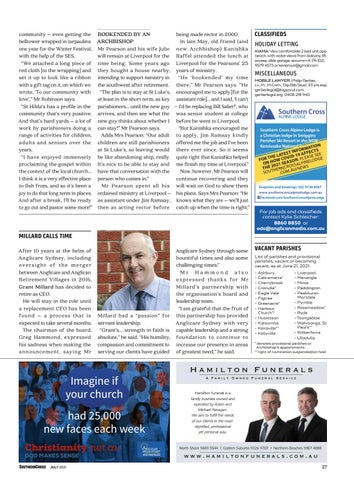 community – even getting the belltower wrapped in tarpaulins one year for the Winter Festival, with the help of the SES. “We attached a long piece of red cloth [to the wrapping] and set it up to look like a ribbon with a gift tag on it, on which we wrote, ‘To our community with love’,” Mr Robinson says. “St Hilda’s has a profile in the community that’s very positive. And that’s hard yards – a lot of work by parishioners doing a range of activities for children, adults and seniors over the years. “I have enjoyed immensely proclaiming the gospel within the context of the local church... I think it is a very effective place to fish from, and so it’s been a joy to do that long term in places. And after a break, I’ll be ready to go out and pastor some more!”

BOOKENDED BY AN ARCHBISHOP Mr Pearson and his wife Julie will remain at Liverpool for the time being. Some years ago they bought a house nearby, intending to support ministry in the southwest after retirement. “The plan is to stay at St Luke’s, at least in the short term, as key parishioners... until the new guy arrives, and then see what the new guy thinks about whether I can stay!” Mr Pearson says. Adds Mrs Pearson: “Our adult children are still parishioners at St Luke’s, so leaving would be like abandoning ship, really. It’s nice to be able to stay and have that conversation with the person who comes in.” Mr Pearson sp ent all his ordained ministry at Liverpool – as assistant under Jim Ramsay, then as acting rector before

being made rector in 2000. CLASSIFIEDS In late May, old friend (and HOLIDAY LETTING new Archbishop) Kanishka KIAMA: Very comfortable 2 bed unit opp Raffel attended the lunch at beach, with water views from balcony, lift access, dble garage, accomm 4. Ph (02) Liverpool for the Pearsons’ 25 9579 4573 or keriemuir@gmail.com years of ministry. MISCELLANEOUS “He ‘bo okended’ my time MOBILE LAWYER: Philip Gerber, there,” Mr Pearson says. “He LL.M., M.Crim., Dip.Bib.Stud. 33 yrs exp. encouraged me to apply [for the gerberlegal@bigpond.com gerberlegal.org 0408 218 940 assistant role]... and I said, ‘I can’t – I’d be replacing Bill Salier!’, who was senior student at college before he went to Liverpool. A Christian lodge in the heart of “But Kanishka encouraged me Southern Alpine Lodge A Christian lodge in theproviding heart ofis the SnowyCross Mountains athe Christian lodge in Smiggins to apply, Jim Ramsay kindly Snowyaccommodation Mountains providing quality and Perisher Ski Resort in1963 theand NSW quality accommodation hospitality since offered me the job and I’ve been Kosciuszko National hospitality since Park. 1963 ATION M R there ever since. So it seems FOOctober Snow season June C TS ST IN to AFFE E SEE TEincluding LA -1to9 October season June FromSnow $72 per day 3 meals daily E S D I H A quite right that Kanishka helped V E T L RSeason after COBird and . P Ediscounts DGE FO N Low$72 Earlyincluding Multi-Night OWday From N LO daily N Hper EASOSALP3Imeals S O 1 me finish my time at Liverpool.” 2 Low Season BirdO discounts S Multi-Night R and E 20afterREarly WS TH E NC Autumn, U/NE Spring And Summer, Now, however, Mr Pearson will OUTH .COM.A SAnd Spring FromSummer, $37 per Autumn, day self-catered continue recovering and they From $37 per day self-catered will wait on God to show them his plans. Says Mrs Pearson: “He knows what they are – we’ll just catch up when the time is right.” For job ads and classifieds contact Kylie Schleicher: 8860 8850 or ads@anglicanmedia.com.au

MILLARD CALLS TIME After 10 years at the helm of Anglicare Sydney, including oversight of the merger between Anglicare and Anglican Retirement Villages in 2016, Grant Millard has decided to retire as CEO. He will stay in the role until a replacement CEO has been found – a pro cess that is expected to take several months. The chairman of the board, Greg Hammond, expressed his sadness when making the announcement, saying Mr

Anglicare Sydney through some bountiful times and also some challenging times.” Mr Hammond also ex p re s s e d t h an k s fo r M r Millard’s partnership with the organisation’s board and leadership team. “I am grateful that the fruit of Millard had a “passion” for this partnership has provided servant leadership. Anglicare Sydney with very “Grant’s... strength in faith is capable leadership and a strong absolute,” he said. “His humility, foundation to continue to compassion and commitment to increase our presence in areas serving our clients have guided of greatest need,” he said.

Imagine if your church