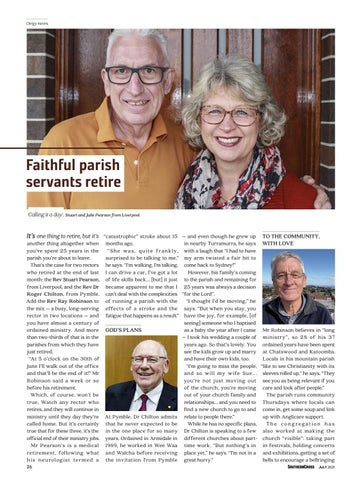 It’s one thing to retire, but it’s “catastrophic” stroke about 15 – and even though he grew up TO THE COMMUNITY, another thing altogether when months ago. you’ve spent 25 years in the “ S he wa s , qu i te f ra n kl y , parish you’re about to leave. surprised to be talking to me,” That’s the case for two rectors he says. “I’m walking, I’m talking, who retired at the end of last I can drive a car, I’ve got a lot month: the Rev Stuart Pearson, of life skills back... [but] it just from Liverpool, and the Rev Dr became apparent to me that I Roger Chilton, from Pymble. can’t deal with the complexities Add the Rev Ray Robinson to of running a parish with the the mix – a busy, long-serving effects of a stroke and the rector in two locations – and fatigue that happens as a result.” you have almost a century of ordained ministry. And more GOD’S PLANS than two-thirds of that is in the parishes from which they have just retired. “At 5 o’clock on the 30th of June I’ll walk out of the office and that’ll be the end of it!” Mr Robinson said a week or so before his retirement. Which, of course, won’t be true. Watch any rector who retires, and they will continue in ministry until they day they’re At Pymble, Dr Chilton admits called home. But it’s certainly that he never expected to be true that for these three, it’s the in the one place for so many official end of their ministry jobs. years. Ordained in Armidale in Mr Pearson’s is a medical 1989, he worked in Wee Waa retirement, following what and Walcha before receiving h i s n e u rol o g i s t te r m e d a the invitation from Pymble 26

in nearby Turramurra, he says with a laugh that “I had to have my arm twisted a fair bit to come back to Sydney!” However, his family’s coming to the parish and remaining for 25 years was always a decision “for the Lord”. “I thought I’d be moving,” he says. “But when you stay, you have the joy, for example, [of seeing] someone who I baptised as a baby the year after I came – I took his wedding a couple of years ago. So that’s lovely. You see the kids grow up and marry and have their own kids, too. “I’m going to miss the people, and so will my wife Sue... you’re not just moving out of the church, you’re moving out of your church family and relationships... and you need to find a new church to go to and relate to people there.” While he has no specific plans, Dr Chilton is speaking to a few different churches about parttime work. “But nothing’s in place yet,” he says. “I’m not in a great hurry.”

Mr Robinson believes in “long ministry”, so 28 of his 37 ordained years have been spent at Chatswood and Katoomba. Locals in his mountain parish “like to see Christianity with its sleeves rolled up,” he says. “They see you as being relevant if you care and look after people.” The parish runs community Thursdays where locals can come in, get some soup and link up with Anglicare support. The congregation has also worked at making the church “visible”: taking part in festivals, holding concerts and exhibitions, getting a set of bells to encourage a bellringing SouthernCross