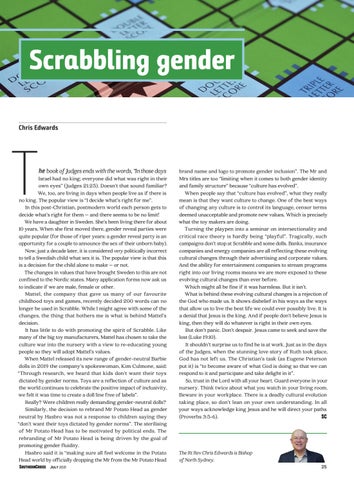 he book of Judges ends with the words, “In those days

Israel had no king; everyone did what was right in their own eyes” (Judges 21:25). Doesn’t that sound familiar? We, too, are living in days when people live as if there is no king. The popular view is “I decide what’s right for me”. In this post-Christian, postmodern world each person gets to decide what’s right for them – and there seems to be no limit! We have a daughter in Sweden. She’s been living there for about 10 years. When she first moved there, gender reveal parties were quite popular (for those of riper years: a gender reveal party is an opportunity for a couple to announce the sex of their unborn baby). Now, just a decade later, it is considered very politically incorrect to tell a Swedish child what sex it is. The popular view is that this is a decision for the child alone to make – or not. The changes in values that have brought Sweden to this are not confined to the Nordic states. Many application forms now ask us to indicate if we are male, female or other. Mattel, the company that gave us many of our favourite childhood toys and games, recently decided 200 words can no longer be used in Scrabble. While I might agree with some of the changes, the thing that bothers me is what is behind Mattel’s decision. It has little to do with promoting the spirit of Scrabble. Like many of the big toy manufacturers, Mattel has chosen to take the culture war into the nursery with a view to re-educating young people so they will adopt Mattel’s values. When Mattel released its new range of gender-neutral Barbie dolls in 2019 the company’s spokeswoman, Kim Culmone, said: “Through research, we heard that kids don’t want their toys dictated by gender norms. Toys are a reflection of culture and as the world continues to celebrate the positive impact of inclusivity, we felt it was time to create a doll line free of labels”. Really? Were children really demanding gender-neutral dolls? Similarly, the decision to rebrand Mr Potato Head as gender neutral by Hasbro was not a response to children saying they “don’t want their toys dictated by gender norms”. The sterilising of Mr Potato Head has to be motivated by political ends. The rebranding of Mr Potato Head is being driven by the goal of promoting gender fluidity. Hasbro said it is “making sure all feel welcome in the Potato Head world by officially dropping the Mr from the Mr Potato Head SouthernCross

brand name and logo to promote gender inclusion”. The Mr and Mrs titles are too “limiting when it comes to both gender identity and family structure” because “culture has evolved”. When people say that “culture has evolved”, what they really mean is that they want culture to change. One of the best ways of changing any culture is to control its language, censor terms deemed unacceptable and promote new values. Which is precisely what the toy makers are doing. Turning the playpen into a seminar on intersectionality and critical race theory is hardly being “playful”. Tragically, such campaigns don’t stop at Scrabble and some dolls. Banks, insurance companies and energy companies are all reflecting these evolving cultural changes through their advertising and corporate values. And the ability for entertainment companies to stream programs right into our living rooms means we are more exposed to these evolving cultural changes than ever before. Which might all be fine if it was harmless. But it isn’t. What is behind these evolving cultural changes is a rejection of the God who made us. It shows disbelief in his ways as the ways that allow us to live the best life we could ever possibly live. It is a denial that Jesus is the king. And if people don’t believe Jesus is king, then they will do whatever is right in their own eyes. But don’t panic. Don’t despair. Jesus came to seek and save the lost (Luke 19:10). It shouldn’t surprise us to find he is at work. Just as in the days of the Judges, when the stunning love story of Ruth took place, God has not left us. The Christian’s task (as Eugene Peterson put it) is “to become aware of what God is doing so that we can respond to it and participate and take delight in it”. So, trust in the Lord with all your heart. Guard everyone in your nursery. Think twice about what you watch in your living room. Beware in your workplace. There is a deadly cultural evolution taking place, so don’t lean on your own understanding. In all your ways acknowledge king Jesus and he will direct your paths (Proverbs 3:5-6).SC

The Rt Rev Chris Edwards is Bishop of North Sydney. 25