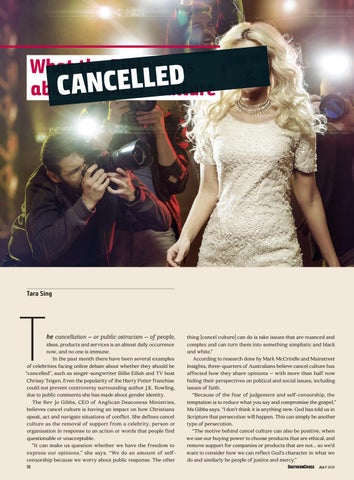 he cancellation – or public ostracism – of people,

ideas, products and services is an almost daily occurrence now, and no one is immune. In the past month there have been several examples of celebrities facing online debate about whether they should be “cancelled”, such as singer-songwriter Billie Eilish and TV host Chrissy Teigen. Even the popularity of the Harry Potter franchise could not prevent controversy surrounding author J.K. Rowling, due to public comments she has made about gender identity. The Rev Jo Gibbs, CEO of Anglican Deaconess Ministries, believes cancel culture is having an impact on how Christians speak, act and navigate situations of conflict. She defines cancel culture as the removal of support from a celebrity, person or organisation in response to an action or words that people find questionable or unacceptable. “It can make us question whether we have the freedom to express our opinions,” she says. “We do an amount of selfcensorship because we worry about public response. The other 18

thing [cancel culture] can do is take issues that are nuanced and complex and can turn them into something simplistic and black and white.” According to research done by Mark McCrindle and Mainstreet Insights, three-quarters of Australians believe cancel culture has affected how they share opinions – with more than half now hiding their perspectives on political and social issues, including issues of faith. “Because of the fear of judgement and self-censorship, the temptation is to reduce what you say and compromise the gospel,” Ms Gibbs says. “I don’t think it is anything new. God has told us in Scripture that persecution will happen. This can simply be another type of persecution. “The motive behind cancel culture can also be positive, when we use our buying power to choose products that are ethical, and remove support for companies or products that are not... so we’d want to consider how we can reflect God’s character in what we do and similarly be people of justice and mercy.” SouthernCross