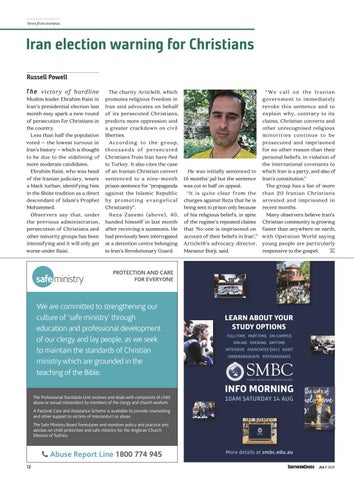 Iran election warning for Christians Russell Powell T h e victory of hardline Muslim leader Ebrahim Raisi in Iran’s presidential election last month may spark a new round of persecution for Christians in the country. Less than half the population voted – the lowest turnout in Iran’s history – which is thought to be due to the sidelining of more moderate candidates. Ebrahim Raisi, who was head of the Iranian judiciary, wears a black turban, identifying him in the Shiite tradition as a direct descendant of Islam’s Prophet Mohammed. Observers say that, under the previous administration, persecution of Christians and other minority groups has been intensifying and it will only get worse under Raisi.

The charity Article18, which promotes religious freedom in Iran and advocates on behalf of its persecuted Christians, predicts more oppression and a greater crackdown on civil liberties. Ac co rdi n g to t he g ro u p , t h o u s a n d s o f p e rs e c u t e d Christians from Iran have fled to Turkey. It also cites the case of an Iranian Christian convert sentenced to a nine-month prison sentence for “propaganda against the Islamic Republic by promotin g evan geli c al Christianity”. Reza Zaeemi (above), 40, handed himself in last month after receiving a summons. He had previously been interrogated at a detention centre belonging to Iran’s Revolutionary Guard.

“ We c a l l o n t h e I r a n i a n government to immediately revoke this sentence and to explain why, contrary to its claims, Christian converts and other unrecognised religious minoritie s continue to be prosecuted and imprisoned for no other reason than their personal beliefs, in violation of the international covenants to He was initially sentenced to which Iran is a party, and also of 18 months’ jail but the sentence Iran’s constitution.” was cut in half on appeal. The group has a list of more “It is quite clear from the than 20 Iranian Christians charges against Reza that he is arrested and imprisoned in being sent to prison only because recent months. of his religious beliefs, in spite Many observers believe Iran’s of the regime’s repeated claims Christian community is growing that ‘No-one is imprisoned on faster than anywhere on earth, account of their beliefs in Iran’,” with Operation World saying Article18’s advocacy director, young people are particularly Mansour Borji, said. responsive to the gospel.SC

PROTECTION AND CARE FOR EVERYONE

We are committed to strengthening our culture of ‘safe ministry’ through education and professional development of our clergy and lay people, as we seek to maintain the standards of Christian ministry which are grounded in the teaching of the Bible. The Professional Standards Unit receives and deals with complaints of child abuse or sexual misconduct by members of the clergy and church workers.

A Pastoral Care and Assistance Scheme is available to provide counselling and other support to victims of misconduct or abuse. The Safe Ministry Board formulates and monitors policy and practice and advises on child protection and safe ministry for the Anglican Church Diocese of Sydney.