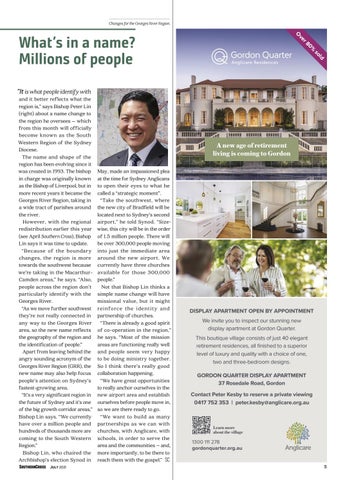 Changes for the Georges River Region.

What’s in a name? Millions of people

“It is what people identify with

A new age of retirement living is coming to Gordon May, made an impassioned plea at the time for Sydney Anglicans to open their eyes to what he called a “strategic moment”. “Take the southwest, where the new city of Bradfield will be located next to Sydney’s second airport,” he told Synod. “Sizewise, this city will be in the order of 1.5 million people. There will be over 300,000 people moving into just the immediate area around the new airport. We currently have three churches available for those 300,000 people.” Not that Bishop Lin thinks a simple name change will have missional value, but it might reinforce the identity and partnership of churches. “There is already a good spirit of co-operation in the region,” he says. “Most of the mission areas are functioning really well and people seem very happy to be doing ministry together. So I think there’s really good collaboration happening. “We have great opportunities to really anchor ourselves in the new airport area and establish ourselves before people move in, so we are there ready to go. “We want to build as many partnerships as we can with churches, with Anglicare, with schools, in order to serve the area and the communities – and, more importantly, to be there to reach them with the gospel.”SC

and it better reflects what the region is,” says Bishop Peter Lin (right) about a name change to the region he oversees – which from this month will officially become known as the South Western Region of the Sydney Diocese. The name and shape of the region has been evolving since it was created in 1993. The bishop in charge was originally known as the Bishop of Liverpool, but in more recent years it became the Georges River Region, taking in a wide tract of parishes around the river. However, with the regional redistribution earlier this year (see April Southern Cross), Bishop Lin says it was time to update. “Because of the boundary changes, the region is more towards the southwest because we’re taking in the MacarthurCamden areas,” he says. “Also, people across the region don’t particularly identify with the Georges River. “As we move further southwest they’re not really connected in any way to the Georges River area, so the new name reflects the geography of the region and the identification of people.” Apart from leaving behind the angry sounding acronym of the Georges River Region (GRR), the new name may also help focus people’s attention on Sydney’s fastest-growing area. “It’s a very significant region in the future of Sydney and it’s one of the big growth corridor areas,” Bishop Lin says. “We currently have over a million people and hundreds of thousands more are coming to the South Western Region.” Bishop Lin, who chaired the Archbishop’s election Synod in

DISPLAY APARTMENT OPEN BY APPOINTMENT We invite you to inspect our stunning new display apartment at Gordon Quarter. This boutique village consists of just 40 elegant retirement residences, all finished to a superior level of luxury and quality with a choice of one, two and three-bedroom designs. GORDON QUARTER DISPLAY APARTMENT 37 Rosedale Road, Gordon Contact Peter Kesby to reserve a private viewing 0417 752 353 | peter.kesby@anglicare.org.au

Learn more about the village