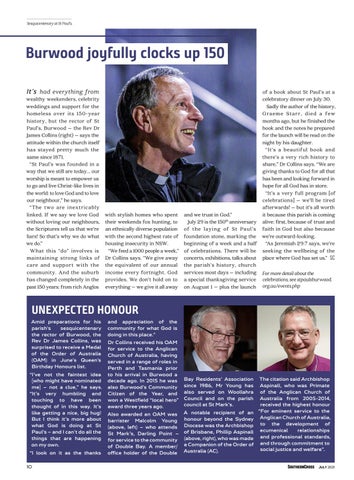 Burwood joyfully clocks up 150 It’s had everything from wealthy weekenders, celebrity weddings and support for the homeless over its 150-year history, but the rector of St Paul’s, Burwood – the Rev Dr James Collins (right) – says the attitude within the church itself has stayed pretty much the same since 1871. “St Paul’s was founded in a way that we still are today... our worship is meant to empower us to go and live Christ-like lives in the world: to love God and to love our neighbour,” he says. “The two are inextricably linked. If we say we love God without loving our neighbours, the Scriptures tell us that we’re liars! So that’s why we do what we do.” What this “do” involves is maintaining strong links of care and support with the community. And the suburb has changed completely in the past 150 years: from rich Anglos

of a book about St Paul’s at a celebratory dinner on July 30. Sadly the author of the history, Graeme Starr, died a few months ago, but he finished the book and the notes he prepared for the launch will be read on the night by his daughter. “It’s a beautiful book and there’s a very rich history to share,” Dr Collins says. “We are giving thanks to God for all that has been and looking forward in hope for all God has in store. “It’s a very full program [of celebrations] – we’ll be tired afterwards! – but it’s all worth with stylish homes who spent and we trust in God.” it because this parish is coming their weekends fox hunting, to July 29 is the 150th anniversary alive: first, because of trust and an ethnically diverse population of the laying of St Paul’s faith in God but also because with the second highest rate of foundation stone, marking the we’re outward-looking. housing insecurity in NSW. beginning of a week and a half “As Jeremiah 29:7 says, we’re “We feed a 1000 people a week,” of celebrations. There will be seeking the wellbeing of the Dr Collins says. “We give away concerts, exhibitions, talks about place where God has set us.” SC the equivalent of our annual the parish’s history, church income every fortnight. God services most days – including For more detail about the provides. We don’t hold on to a special thanksgiving service celebrations, see stpaulsburwood. everything – we give it all away on August 1 – plus the launch org.au/events.php

UNEXPECTED HONOUR Amid preparations for his parish’s sesquicentenary the rector of Burwood, the Rev Dr James Collins, was surprised to receive a Medal of the Order of Australia (OAM) in June’s Queen’s Birthday Honours list. “I’ve not the faintest idea [who might have nominated me] – not a clue,” he says. “It’s very humbling and touching to have been thought of in this way. It’s like getting a nice, big hug! But I think it’s more about what God is doing at St Paul’s – and I can’t do all the things that are happening on my own. “I look on it as the thanks 10

and appreciation of the community for what God is doing in this place.” Dr Collins received his OAM for service to the Anglican Church of Australia, having served in a range of roles in Perth and Tasmania prior to his arrival in Burwood a decade ago. In 2015 he was also Burwood’s Community Citizen of the Year, and won a Westfield “local hero” award three years ago.

Bay Residents’ Association since 1986, Mr Young has also served on Woollahra Council and on the parish council at St Mark’s.

Also awarded an OAM was barrister Malcolm Young (above, left) – who attends St Mark’s, Darling Point – for service to the community of Double Bay. A member/ office holder of the Double

A notable recipient of an honour beyond the Sydney Diocese was the Archbishop of Brisbane, Phillip Aspinall (above, right), who was made a Companion of the Order of Australia (AC).