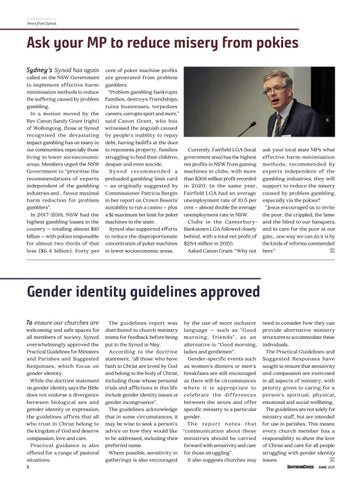 Ask your MP to reduce misery from pokies Sydney’s Synod has again cent of poker machine profits called on the NSW Government to implement effective harmminimisation methods to reduce the suffering caused by problem gambling. In a motion moved by the Rev Canon Sandy Grant (right) of Wollongong, those at Synod recognised the devastating impact gambling has on many in our communities, especially those living in lower socioeconomic areas. Members urged the NSW Government to “prioritise the recommendations of experts independent of the gambling industries and... favour maximal harm reduction for problem gamblers”. In 2017-2018, NSW had the highest gambling losses in the country – totalling almost $10 billion – with pokies responsible for almost two thirds of that loss ($6.4 billion). Forty per

are generated from problem gamblers. “Problem gambling bankrupts families, destroys friendships, ruins businesses, torpedoes careers, corrupts sport and more,” said Canon Grant, who has witnessed the anguish caused by people’s inability to repay debt, having bailiffs at the door to repossess property, families struggling to feed their children, despair and even suicide. S y n o d re co mme nde d a preloaded gambling limit card – as originally suggested by Commissioner Patricia Bergin in her report on Crown Resorts’ suitability to run a casino – plus a $1 maximum bet limit for poker machines in the state. Synod also supported efforts to reduce the disproportionate concentration of poker machines in lower socioeconomic areas.

Currently, Fairfield LGA (local government area) has the highest net profits in NSW from gaming machines in clubs, with more than $308 million profit recorded in 2020. In the same year, Fairfield LGA had an average unemployment rate of 10.5 per cent – almost double the average unemployment rate in NSW. Clubs in the CanterburyBankstown LGA followed closely behind, with a total net profit of $284 million in 2020. Asked Canon Grant: “Why not

ask your local state MPs what effective harm-minimisation methods, recommended by experts independent of the gambling industries, they will support to reduce the misery caused by problem gambling, especially via the pokies? “Jesus encouraged us to invite the poor, the crippled, the lame and the blind to our banquets, and to care for the poor at our gate… one way we can do it is by the kinds of reforms commended here.”  SC

Gender identity guidelines approved To ensure our churches are welcoming and safe spaces for all members of society, Synod overwhelmingly approved the Practical Guidelines for Ministers and Parishes and Suggested Responses, which focus on gender identity. While the doctrine statement on gender identity says the Bible does not endorse a divergence between biological sex and gender identity or expression, the guidelines affirm that all who trust in Christ belong to the kingdom of God and deserve compassion, love and care. Practical guidance is also offered for a range of pastoral situations. 6

The guidelines report was by the use of more inclusive distributed to church ministry language – such as “Good teams for feedback before being morning, friends”, as an put to the Synod in May. alternative to “Good morning, According to the doctrine ladies and gentlemen”. statement, “all those who have Gender-specific events such faith in Christ are loved by God as women’s dinners or men’s and belong to the body of Christ, breakfasts are still encouraged including those whose personal as there will be circumstances trials and afflictions in this life where it is appropriate to include gender identity issues or celebrate the differences gender incongruence”. between the sexes and offer The guidelines acknowledge specific ministry to a particular that in some circumstances, it gender. may be wise to seek a person’s T h e re p o r t n o t e s t h a t advice on how they would like “communication about these to be addressed, including their ministries should be carried preferred name. forward with sensitivity and care Where possible, sensitivity in for those struggling”. gatherings is also encouraged It also suggests churches may

need to consider how they can provide alternative ministry structures to accommodate these individuals. The Practical Guidelines and Suggested Responses have sought to ensure that sensitivity and compassion are exercised in all aspects of ministry, with priority given to caring for a person’s spiritual, physical, emotional and social wellbeing. The guidelines are not solely for ministry staff, but are intended for use in parishes. This means every church member has a responsibility to show the love of Christ and care for all people struggling with gender identity issues.  SC SouthernCross