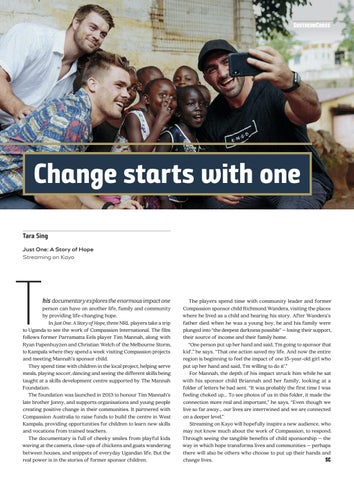 Change starts with one Tara Sing Just One: A Story of Hope Streaming on Kayo

his documentary explores the enormous impact one

person can have on another life, family and community by providing life-changing hope. In Just One: A Story of Hope, three NRL players take a trip to Uganda to see the work of Compassion International. The film follows former Parramatta Eels player Tim Mannah, along with Ryan Papenhuyzen and Christian Welch of the Melbourne Storm, to Kampala where they spend a week visiting Compassion projects and meeting Mannah’s sponsor child. They spend time with children in the local project, helping serve meals, playing soccer, dancing and seeing the different skills being taught at a skills development centre supported by The Mannah Foundation. The foundation was launched in 2013 to honour Tim Mannah’s late brother Jonny, and supports organisations and young people creating positive change in their communities. It partnered with Compassion Australia to raise funds to build the centre in West Kampala, providing opportunities for children to learn new skills and vocations from trained teachers. The documentary is full of cheeky smiles from playful kids waving at the camera, close-ups of chickens and goats wandering between houses, and snippets of everyday Ugandan life. But the real power is in the stories of former sponsor children.

The players spend time with community leader and former Compassion sponsor child Richmond Wandera, visiting the places where he lived as a child and hearing his story. After Wandera’s father died when he was a young boy, he and his family were plunged into “the deepest darkness possible” – losing their support, their source of income and their family home. “One person put up her hand and said, ‘I’m going to sponsor that kid’,” he says. “That one action saved my life. And now the entire region is beginning to feel the impact of one 15-year-old girl who put up her hand and said, ‘I’m willing to do it’.” For Mannah, the depth of his impact struck him while he sat with his sponsor child Briannah and her family, looking at a folder of letters he had sent. “It was probably the first time I was feeling choked up... To see photos of us in this folder, it made the connection more real and important,” he says. “Even though we live so far away… our lives are intertwined and we are connected on a deeper level.” Streaming on Kayo will hopefully inspire a new audience, who may not know much about the work of Compassion, to respond. Through seeing the tangible benefits of child sponsorship – the way in which hope transforms lives and communities – perhaps there will also be others who choose to put up their hands and change lives.  SC