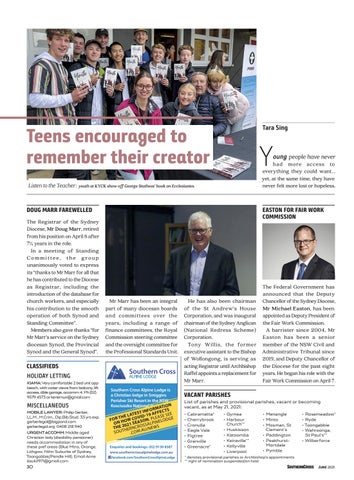 Teens encouraged to remember their creator

Listen to the Teacher: youth at KYCK show off George Statheos’ book on Ecclesiastes.

DOUG MARR FAREWELLED The Registrar of the Sydney Diocese, Mr Doug Marr, retired from his position on April 8 after 7½ years in the role. In a meeting of Standing Committee, the group unanimously voted to express its “thanks to Mr Marr for all that he has contributed to the Diocese as Registrar, including the introduction of the database for church workers, and especially his contribution to the smooth operation of both Synod and Standing Committee”. Members also gave thanks “for Mr Marr’s service on the Sydney diocesan Synod, the Provincial Synod and the General Synod”.

Mr Marr has been an integral part of many diocesan boards and committees over the years, including a range of finance committees, the Royal Commission steering committee and the oversight committee for the Professional Standards Unit.

had more access to everything they could want... yet, at the same time, they have never felt more lost or hopeless.

He has also been chairman of the St Andrew’s House Corporation, and was inaugural chairman of the Sydney Anglican (National Redress Scheme) Corporation. Tony Willis, the former executive assistant to the Bishop of Wollongong, is serving as acting Registrar until Archbishop Raffel appoints a replacement for Mr Marr.

The Federal Government has announced that the Deputy Chancellor of the Sydney Diocese, Mr Michael Easton, has been appointed as Deputy President of the Fair Work Commission. A barrister since 2004, Mr Easton has been a senior member of the NSW Civil and Administrative Tribunal since 2019, and Deputy Chancellor of the Diocese for the past eight years. He began his role with the Fair Work Commission on April 7.