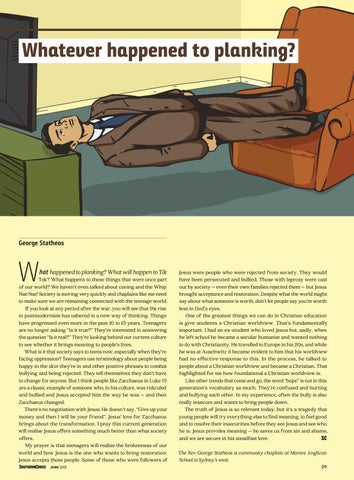 Whatever happened to planking?

hat happened to planking? What will happen to Tik

Tok? What happens to these things that were once part of our world? We haven’t even talked about coning and the Whip Nae Nae! Society is moving very quickly and chaplains like me need to make sure we are remaining connected with the teenage world. If you look at any period after the war, you will see that the rise in postmodernism has ushered in a new way of thinking. Things have progressed even more in the past 10 to 15 years. Teenagers are no longer asking “Is it true?” They’re interested in answering the question “Is it real?” They’re looking behind our current culture to see whether it brings meaning to people’s lives. What is it that society says to teens now, especially when they’re facing oppression? Teenagers use terminology about people being happy in the skin they’re in and other positive phrases to combat bullying and being rejected. They tell themselves they don’t have to change for anyone. But I think people like Zacchaeus in Luke 19 are a classic example of someone who, in his culture, was ridiculed and bullied and Jesus accepted him the way he was – and then Zacchaeus changed. There’s no negotiation with Jesus. He doesn’t say, “Give up your money and then I will be your friend”. Jesus’ love for Zacchaeus brings about the transformation. I pray this current generation will realise Jesus offers something much better than what society offers. My prayer is that teenagers will realise the brokenness of our world and how Jesus is the one who wants to bring restoration. Jesus accepts these people. Some of those who were followers of SouthernCross

Jesus were people who were rejected from society. They would have been persecuted and bullied. Those with leprosy were cast out by society – even their own families rejected them – but Jesus brought acceptance and restoration. Despite what the world might say about what someone is worth, don’t let people say you’re worth less in God’s eyes. One of the greatest things we can do in Christian education is give students a Christian worldview. That’s fundamentally important. I had an ex-student who loved Jesus but, sadly, when he left school he became a secular humanist and wanted nothing to do with Christianity. He travelled to Europe in his 20s, and while he was at Auschwitz it became evident to him that his worldview had no effective response to this. In the process, he talked to people about a Christian worldview and became a Christian. That highlighted for me how foundational a Christian worldview is. Like other trends that come and go, the word “hope” is not in this generation’s vocabulary as much. They’re confused and hurting and bullying each other. In my experience, often the bully is also really insecure and wants to bring people down. The truth of Jesus is so relevant today, but it’s a tragedy that young people will try everything else to find meaning, to feel good and to resolve their insecurities before they see Jesus and see who he is. Jesus provides meaning – he saves us from sin and shame, and we are secure in his steadfast love.  SC The Rev George Statheos is community chaplain at Mamre Anglican School in Sydney’s west. 29