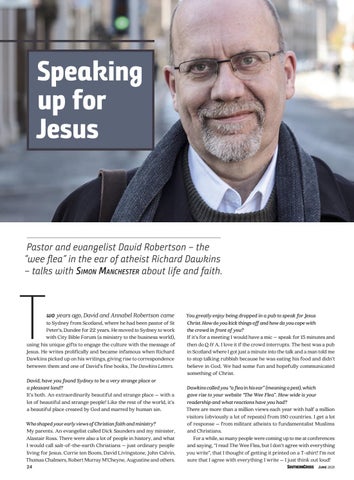 Speaking up for Jesus

Pastor and evangelist David Robertson – the “wee flea” in the ear of atheist Richard Dawkins – talks with Simon Manchester about life and faith.

wo years ago, David and Annabel Robertson came

to Sydney from Scotland, where he had been pastor of St Peter’s, Dundee for 22 years. He moved to Sydney to work with City Bible Forum (a ministry to the business world), using his unique gifts to engage the culture with the message of Jesus. He writes prolifically and became infamous when Richard Dawkins picked up on his writings, giving rise to correspondence between them and one of David’s fine books, The Dawkins Letters. David, have you found Sydney to be a very strange place or a pleasant land? It’s both. An extraordinarily beautiful and strange place – with a lot of beautiful and strange people! Like the rest of the world, it’s a beautiful place created by God and marred by human sin.

Who shaped your early views of Christian faith and ministry? My parents. An evangelist called Dick Saunders and my minister, Alastair Ross. There were also a lot of people in history, and what I would call salt-of-the-earth Christians – just ordinary people living for Jesus. Corrie ten Boom, David Livingstone, John Calvin, Thomas Chalmers, Robert Murray M’Cheyne, Augustine and others. 24

You greatly enjoy being dropped in a pub to speak for Jesus Christ. How do you kick things off and how do you cope with the crowd in front of you? If it’s for a meeting I would have a mic – speak for 15 minutes and then do Q & A. I love it if the crowd interrupts. The best was a pub in Scotland where I got just a minute into the talk and a man told me to stop talking rubbish because he was eating his food and didn’t believe in God. We had some fun and hopefully communicated something of Christ. Dawkins called you “a flea in his ear” (meaning a pest), which gave rise to your website “The Wee Flea”. How wide is your readership and what reactions have you had? There are more than a million views each year with half a million visitors (obviously a lot of repeats) from 180 countries. I get a lot of response – from militant atheists to fundamentalist Muslims and Christians. For a while, so many people were coming up to me at conferences and saying, “I read The Wee Flea, but I don’t agree with everything you write”, that I thought of getting it printed on a T-shirt! I’m not sure that I agree with everything I write – I just think out loud! SouthernCross