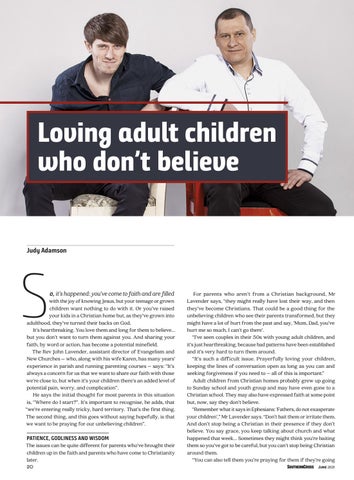 o, it’s happened: you’ve come to faith and are filled

with the joy of knowing Jesus, but your teenage or grown children want nothing to do with it. Or you’ve raised your kids in a Christian home but, as they’ve grown into adulthood, they’ve turned their backs on God. It’s heartbreaking. You love them and long for them to believe... but you don’t want to turn them against you. And sharing your faith, by word or action, has become a potential minefield. The Rev John Lavender, assistant director of Evangelism and New Churches – who, along with his wife Karen, has many years’ experience in parish and running parenting courses – says: “It’s always a concern for us that we want to share our faith with those we’re close to, but when it’s your children there’s an added level of potential pain, worry, and complication”. He says the initial thought for most parents in this situation is, “Where do I start?”. It’s important to recognise, he adds, that “we’re entering really tricky, hard territory. That’s the first thing. The second thing, and this goes without saying hopefully, is that we want to be praying for our unbelieving children”. PATIENCE, GODLINESS AND WISDOM The issues can be quite different for parents who’ve brought their children up in the faith and parents who have come to Christianity later. 20

For parents who aren’t from a Christian background, Mr Lavender says, “they might really have lost their way, and then they’ve become Christians. That could be a good thing for the unbelieving children who see their parents transformed, but they might have a lot of hurt from the past and say, ‘Mum, Dad, you’ve hurt me so much, I can’t go there’. “I’ve seen couples in their 50s with young adult children, and it’s just heartbreaking, because bad patterns have been established and it’s very hard to turn them around. “It’s such a difficult issue. Prayerfully loving your children, keeping the lines of conversation open as long as you can and seeking forgiveness if you need to – all of this is important.” Adult children from Christian homes probably grew up going to Sunday school and youth group and may have even gone to a Christian school. They may also have expressed faith at some point but, now, say they don’t believe. “Remember what it says in Ephesians: ‘Fathers, do not exasperate your children’,” Mr Lavender says. “Don’t bait them or irritate them. And don’t stop being a Christian in their presence if they don’t believe. You say grace, you keep talking about church and what happened that week... Sometimes they might think you’re baiting them so you’ve got to be careful, but you can’t stop being Christian around them. “You can also tell them you’re praying for them if they’re going SouthernCross